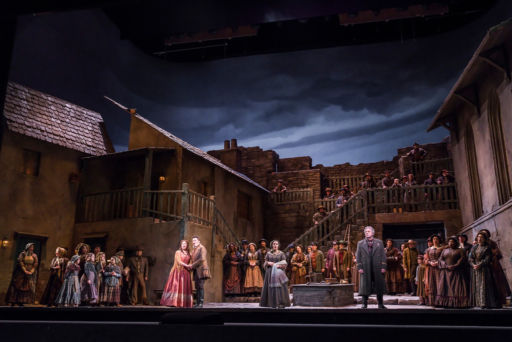 Verdi was drawn to the manic, self-destructive character of Schiller’s adolescent heroes. Aside from Giovanna d’Arco, which has a female central character and is in any case not closely derived from Schiller’s original, the Verdi operas based on Schiller plays, I Masnadieri, Luisa Miller and Don Carlos, all focus on the tangled family and social relationships of a hysterical young man in revolt against the box in which his society has placed him. These figures—Carlo Moor, Rodolfo and Don Carlos—are adolescent to a degree, attractive, unreasonable and half mad. Two of them murder the woman they love and all of them threaten their fathers and are in revolt against society. Their aristocratic birth is an unbearable burden to them. Their intemperate behavior undermines the sympathy we might feel for their aspirations. Transformed into a tenor of the post-bel canto blood-and-thunder stage of the Risorgimento, such characters are sexy, passionate, attractive and repulsive at the same time. Verdi hoped to recreate the triumph he had had with Ernani, but Schiller’s heroes are rather more thoughtful than Hugo’s. They find themselves in considerably less traditional situations, and in the own composer’s day, these operas had a more limited success than Ernani. In Ernani, no one has to think; you just sing. With the current revival of Luisa Miller at the Met, in Elijah Moshinsky’s 2001 production which sets the piece in the drab colors and cramped slums of the British Industrial Revolution, the star of the occasion is the Met Orchestra as led by Bertrand de Billy. He brings out the exquisite woodwind writing, especially for clarinets and flutes, and propels the reckless melodrama to its tragic and depressing conclusion, three corpses on stage (all of them intemperately slain by Rodolfo, who is one of them) and two grieving fathers: the honest soldier Miller and the dishonest aristocrat Count Walter. The remarkable cast presented five Slavs among the six leads, which says something or other about who is singing Verdi these days. For many generations, most Russian singers were unable to westernize their vowels sufficiently to sing western music anything like idiomatically, though there were always extraordinary exceptions, from Chaliapin to Borodina. Curiously, Bulgarians—though they too must have been raised on the method of the Slavonic church—have never had this problem and often triumph in western careers, and Poles and Slovaks have long been among the major singers of their times. Piotr Beczala, a Pole, is a leading tenor of the romantic Italian repertory (also the French and Russian repertories), moving cautiously into more dramatic roles, such as Lohengrin. His Rodolfo was ardent and sweet, with high-arching lines and excellent vocal control. His despair was not manic, he seemed too well bred for murder, but it was a vocally sure performance and he cuts, with his new mustache, a most gallant figure.His romantic partner was Sonya Yoncheva, a Bulgarian soprano with a large, impressively beautiful voice, amiable if temperamentally cool in the recent new Tosca. Luisa does not have Tosca’s actress temperament, and Yoncheva played her delirious flightiness in the first scene, her resentment and suppressed rage in Act II, her hopelessness in Act III very much to the point. Verdi has written similar ornaments in each act, but

they signify different things: from the first duet, in which Yoncheva blended superbly with Beczala, to the fury of her denunciation of Wurm, to her final anguish. Hers is a grateful, womanly sound, and my only regret was a tendency to scoop at the beginning of a passionate phrases rather than hitting the opening note squarely. It is a habit she should try to eliminate. In the suave and hypocritical role of Rodolfo’s father, Count Walter, Alexander Vinogradov was ideal, silky and cynical in public, exposing his true, bitter self only in private conference with Dmitry Belosselksiy’s Wurm. Wurm is an underwritten role—his villainy has no aria to explain itself, his supposed sexual obsession with Luisa is never very real to us, but Belosselsky, besides being younger and better looking than most Wurms, is also a good actor. The duet for the two conspiring basses was sinister and potent, and for the first time it struck me that this is a number Verdi would recall when writing for King Philip and the Grand Inquisitor on a later Schiller-inspired occasion. Both these Russian basses sang admirably and with Italian stylistic flare. I hope they will both go on to similar assignments, such as Fiesco, Procida and the Padre Guardiano. Olesya Petrova seemed threatening rather than sympathetic as the Duchess Federica, self-involved and triumphant in the scene of the great a cappella quartet, but the text justifies this interpretation. She is a tall woman with a loud voice, and Federica does not allow her sufficient scope for such an instrument. The Met often hires large-voiced Russian mezzos but seldom stages the operas that could make proper use of them; Petrova follows this trend. The role of Luisa’s father, Miller, can be a star-maker—it was so for Sherill Milnes when I first heard the opera, opposite Caballé and Tucker—and most of the current run of performances have given it to Placido Domingo, whose baritone essays do not appeal to me. I want to hear a real baritone sing this music, from the great initial double aria to the gorgeous father-daughter duet in the final scene, one of Verdi’s earliest domestic masterpieces. Therefore I waited till Domingo’s off-night to give Luca Salsi a chance. “Sacra la scelta,” his opening aria, was disappointing, vague of pitch and effect, and the cabaletta did not explode. One began to reflect that, happily, Miller spends all of Act II offstage in a dungeon. By Act III, though, Salsi had warmed to his task of aiding Yoncheva’s appeal to our emotions and Beczala’s Schillerian despair. Maestro De Billy, as I have said, held things together very nicely for this fine cast, and there were exquisite moments in the overture and later, especially from the clarinet and the flutes. The chorus performed their background assignments with polish. The stage movement, Moshinsky’s obsession with Dickensian street people, children’s games and other impertinences, was distracting and anti-dramatic—the walk-ons, mute or otherwise, kept intruding on our attention when Luisa’s inner conflict was a better target for our attention. Photo Chris Lee / Met Opera