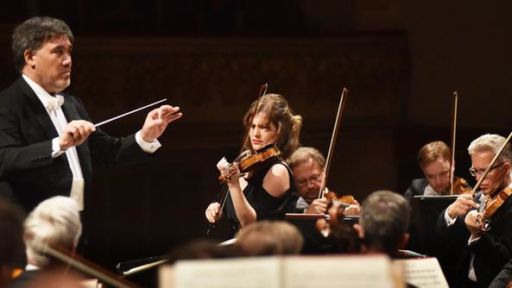 Verona, Teatro Filarmonico, Il Settembre dell’Accademia 2018.
Staatskapelle Dresden
Conductor Alan Gilbert
Violin Lisa Batiashvili
Sergej Sergeevič Prokof’ev: Violin Concerto n.2 op.63 in G minor
Gustav Mahler: Symphony No.1 in D major “Titan”
Verona, 6th September 2018
The prestigious and emblazoned Accademia Filarmonica di Verona in its 475th year of activity chose an equally prestigious and emblazoned orchestra as the first of the world renowned orchestras to appear on this year’s programme of their September Festival “Il Settembre dell’Accademia”. Founded a mere 5 years after the Accademia, the Staatskapelle Dresden is one of the oldest and most venerable orchestras in the world and one of the richest in tradition. In its long history many of the greatest conductors, soloists and composers have left their mark: most notably Richard Wagner and Richard Strauss. The full weight of the Staatskapelle cultural tradition and musicianship was manifest in their performance of Gustav Mahler’s Symphony No.1, “Titan” under the skilful guidance of Alan Gilbert and in their empathetic and stylish engagement with the soloist of Prokofiev’s Violin Concerto No.2, Lisa Batiashvili at the Teatro Filarmonico in Verona.
Lisa Batiashvili held the public enthralled with a captivating mix of sweetness, power and intensity of sound. The manner of self assurance and the eloquence of her presentation and the equilibrium created by a perfect understanding with conductor and orchestra completely engaged the audience drawing them into her musical vision. Throughout the entire performance, from the opening bars’ plaintive, five-beat motive in the solo violin, to the abrupt and unexpected changes of musical direction, the sweet singing quality of her sound and the suppleness and malleability of her playing were constants underpinned by a commanding and unequivocal musical conviction and technical certainty, emblematically illustrated where the solo violin 5 beat motive is spun into a fully fledged melody in G minor(reminiscent of Prokofiev’s Romeo and Juliet) eventually punctuated by episodes of abrupt changes in tonality, rhythmic pulse, and mood. Equally evocative was the second movement, Andante Assai, characterised by a wistful and unpretentious songlike theme in E flat major. Always at one with the soloist, the orchestra provided a gentle, harmonically unobtrusive accompaniment as the violin theme varied and developed, only to reverse each other’s roles roles in the final bars as a thematic fragment and its pizzicato accompaniment provided by the the solo violin, recaptured the initial mood fading away into quietness. In the last movement the soloist and orchestra danced together, at times with the genteel reserve of a waltz and at others with a more rustic, uninhibited character, highlighting the episodes of grotesquerie and dark comedy that spring forth and propel the movement to its tumultuous close. The enthusiastic and effusive applause that exploded at the end of the performance was rewarded, to the delight of the audience, with an encore in theme with the programme; an arrangement for violin soloist and orchestra of The Dance of the Knights from Romeo and Juliet.
In a festive atmosphere of heightened expectation a much expanded orchestra returned on stage after the interval for Mahler’s first Symphony, the Titan. The most modern and imaginative symphony ever written overflows with aural memories, programmatic images and self-referential musical citations, fusing the imagination and narrative of the symphonic poem with the architectural cohesion of former symphonic models. From the rarefied atmosphere established by the strings with the opening all-enveloping, shimmering, spellbinding, ethereal A spread across7 octaves, it was clear that the Dresden orchestra inhabited this work. Familiar programmatic images, “the waking of Nature after a long winter”, bird calls, distant fanfares, country ländler, the surreal and jeering Frère Jacques dirge with background strains of klezmer, were sharply characterized, shaped and well integrated into the overarching musical vision and inserted into the warmth and depth of the orchestral sound.
Gilbert gave a committed performance, striking in his ability to connect audience and orchestra. He drew attention to every detail of the score with technical precision and each significant instrumental intervention compelling the listener to follow his narrative. His musical intention was well defined and clearly transmitted, communicated with intensity and lucidity, in a style devoid of flamboyance but effective in his articulate and expressive gesture. Decisive phrasing and brisk pacing propelled the interpretation. The surging performance, particularly in the gigantic finale was also the result of the huge dynamic range displayed and the pacing of the final climax leading up to the unleashing of the percussion before the crashing final chords. The last movement provided the scope to luxuriate in the full impact of the luminous strings, the elegant woodwind, the vibrant brass and the dashing percussion. An ovation led to a rousing Wagnerian encore which completed the evening.