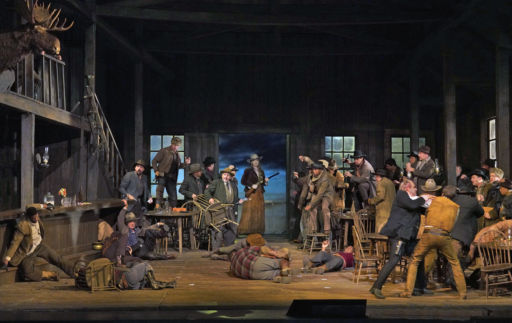 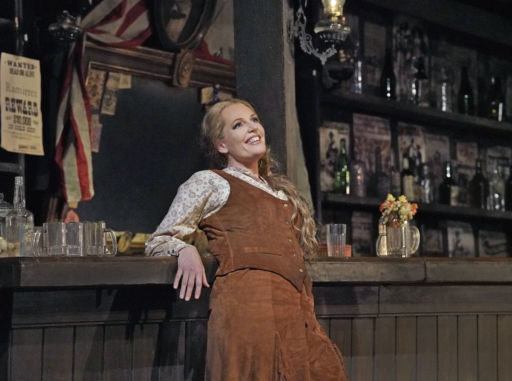 In his 1910 commission for the Metropolitan Opera, Giacomo Puccini discarded traditional arias to attempt a somewhat Wagnerian music-drama, each of three acts moving seamlessly from curtainrise to fall. The melodies hint of themselves before full statement, evolve and linger, are hummed by the orchestra or by the miners themselves (during the sweet scene of Minnie’s first waltz), and fade into the distance at the conclusion of the evening. The absence of familiar airs, set apart from the fabric of the work so that they can be properly applauded (and, later, recorded on three-minute 78 rpm discs) is one thing, perhaps, that prevented audiences from becoming immediately familiar with this American opera, from taking it to their hearts. And so Fanciulla has never been a hit comparable to Puccini’s three previous operas or even his last one. Yet many opera-lovers regard it as his most fascinating and sophisticated score. It is a moody piece, a mood of nostalgia for something unknown, that hangs in the air of its preludes or behind the sung dialogue like smoke from a wood fire in the pristine wilderness—nostalgia for someplace you’ve never been, like the idealized 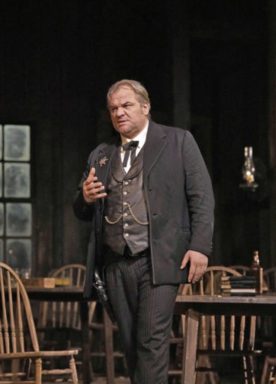 California past. The miners are homesick for a single kindly hand, but few of them recall their homes very well, and Minnie’s hand, stern but gentle, is the hand they love. Minnie is nostalgic for her parents’ long-lost love in Soledad. Johnson/Ramerrez is nostalgic for the time before his father’s death when he thought he could live an honest life. Only Sheriff Jack Rance dislikes the past—he remembers it very clearly; his wife still lives there, and he is determined to leave her for Minnie—who isn’t interested.
The Met has given Fanciulla little more than a hundred times since the world premiere. Perhaps the lack of Caruso and Emmy Destinn in later years put the kibosh on revivals. Frankly, Dick and Minnie are neither easy nor simple roles to sing, long and wide-ranging, and both must be acted convincingly as well. And then to be denied the reward of applause for an unforgettable aria, to be upstaged all night by the snowy mountain landscape—well, it’s a bit much, don’t you think? The current Met production by Giancarlo Del Monaco is a bit too inspired by Sergio Leone’s spaghetti westerns, which take place a generation or three later than the Gold Rush era. The mountains are beautifully depicted and the snow falls on cue, but the ruined old mining town Del Monaco has built for us in Act III would actually, in 1849, not yet have come into existence. (Puccini set this scene in the great redwood forests.) Too, the placement of doors seems designed to hinder thrilling entrances David Belasco placed at the heart of his play, and Puccini carried over into the opera. One of the miners fires off a pistol from the front of the stage early in the proceedings—for no reason I could see but because we were not expecting it—but when Minnie enters, supposedly from the attic with pistols 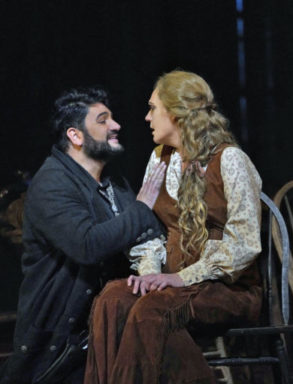 a-blazing to break up a bar fight, Del Monaco and the revival stage director, Gregory Keller, have placed her outside the front door at the rear of the stage, and have given her a shot gun loaded with toy caps that would not scare a five-year-old. Puccini loved a great entrance, and he worked hard to create them. What is the point of killing it? The point is matched in Act III, when Minnie, alerted that her lover is to be lynched, rides in on horseback, calling out in desperation. At the Met: No horse. She ambles into town (perhaps to do a little shopping), and she fires her shotgun again, this time without even looking where she’s firing it. I was genuinely surprised she did not hit poor Dick Johnson, standing there on a roof with a noose around his neck. One more pointless annoyance: As the lovers rode off into the sunset (actually, they are going southeast, which is the wrong direction for sunset even on the Pacific coast), Sheriff Rance, unreconciled to the happy ending, stands stage center and pulls out his pistol, taking aim at them. In the end he can’t shoot, but what was the point of this? For one thing, it makes the baritone central to the love story, which he is not. Scarpia was, and Michele in Il Tabarro, but not the Sheriff. He should go quietly  Minnie sings a lot, and must sing with full-bodied tone though her words are naïve. She is an untouched flower in the wilderness (her first dance occurs in Act I; her first kiss in Act II, and also her first disillusion), but Puccini has composed his score for the earth-mother underneath. We must feel her there. I often feel with Dutch soprano Eva-Marie 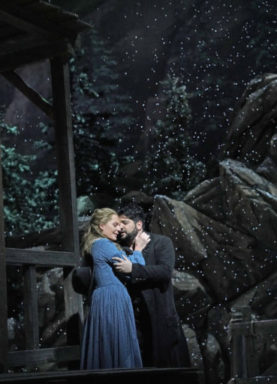 Westbroek that she has been given the great spinto roles because we live, at present, in a time of no great spintos. Thus, her Sieglinde and Francesca da Rimini were unsatisfying, lacking lyricism, while her Lady Macbeth of Mtsensk—a role in which Shostakovich makes fun of sincere lyricism—was superbly on target. I feared that her Minnie would be another unsatisfying stab at full-scale soprano, and there were shrill moments in her first scene or two, but she calmed down in short order. For one thing, Minnie is a major acting role; Minnie must mother the miners and keep them schoolmarmishly in line, flirt with new customers but sternly draw the line, order men about coolly, from long familiarity with her strength and theirs—but then she meets Dick Johnson and—she melts. We see this coming on slowly, then feverishly, then deeply. By the end of Act II, she is cheating at cards for a man she knows has been sleeping with other women. It’s quite an arc, and none of it occurs between scenes or offstage—we see it all, and hear it all. Westbroek acted girlish and tough and yielding by turns, and she filled the house with many pleasing phrases. Gradually the top grew more secure, though one never felt it natural to her. But she was a woman, a frontier woman, and we felt it and honored it. 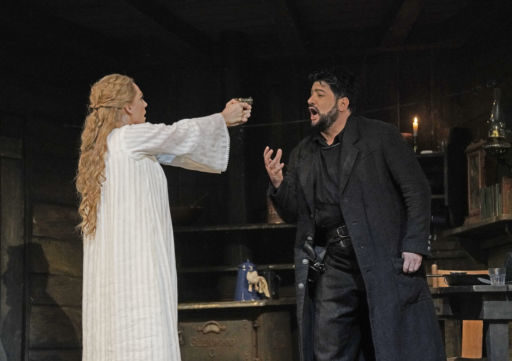 While we are waiting for Jonas Kaufmann to take on Dick Johnson, which he does next Wednesday, the role’s first four performances have been entrusted to Yusif Eyvazov, an Azeri tenor of Algerian birth. He has a most agreeable voice, light and attractive at first encounter, and makes a handsome mustachioed figure, just slightly shorter than Westbroek. One wondered if he had the strength for the role’s heartier, more desperate measures, but like Westbroek he warmed to the work. He knows how to pace himself and how to pay out a lyric line so it supports the scene. They made a charming couple. His “Ch’ella mi creda” was low and gruff, but this suited the emotions of the moment superbly and set up the scene for Minnie’s offstage cries. A pleasure to catch him near the beginning of what is sure to be a notable career.
The director seemed to have the idea of promoting Sheriff Rance to a more fundamental role in the drama than Puccini demands. It’s a good part but it’s not, as we have said, Scarpia—he is no villain, and he does not shadow the unfolding drama. The opera is not a tragedy—it is a hopeful view of a young nation, one that had been kind to Puccini, a favor he was eager to return. Therefore Željko Lučić 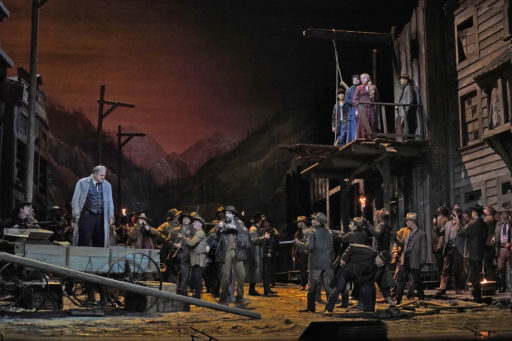 seemed a bit too looming, too menacing. He sang well and without bluster, it’s always been a strong instrument, and his flirtation with Minnie was precisely right. But the attempted ambush at the finale was out of place. The other miners sang well and their stage groupings seem to have been a particular focus of the stage director, but one result of so much stage business was that their lines, the vignettes of mine camp interaction over which Belasco and Puccini took such effort, went unheard, concealed behind a mobile crowd. Marco Armiliato took loving care of this dreamy score with its great sweeps of underscoring and implied melody, a foretaste of the great movie scores of the following hundred years. One sensed, from Armiliato’s ample pacing, that Puccini might have gotten away with ditching the singers and calling the thing a “California Symphony.” But without a story and personalities to upholster with it, he never reached that sort of mood. So we must have Fanciulla as an opera, and it is a jewel in the American crown.Photo Ken Howard