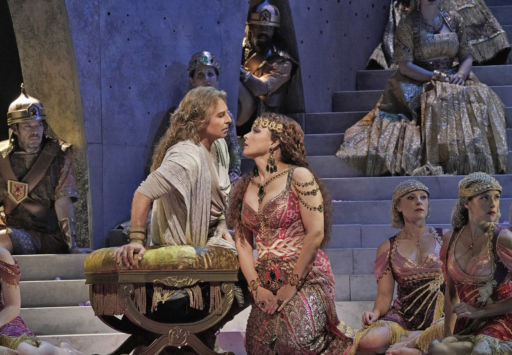 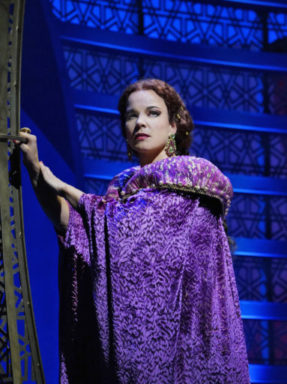 Samson et Dalila is a first-rate grand opera, if a bit old-fashioned for 1872. The story is clearly told, the music beautiful and suitable, the orchestration subtle and brilliant, the concluding coup de théâtre among the most thrilling of the lyric stage. This is not a piece with anything to apologize for. I don’t know why producers are embarrassed by it.  In 1872, true, the use of an Old Testament story on the secular stage shocked the authorities; the opera could not be staged in France, in Great Britain, in parts of the United States. This discouraged the composer from completing it as anything but an oratorio, but when he played the great duet from Act II on the piano for his friend Franz Liszt, Liszt insisted it was wonderful (who would deny it?) and promised to get the opera produced in Weimar. And so he did. Samson soon triumphed everywhere.
So if you have great singers (and you only really need two), stage it! But why blush for it? The tenor, champion of his people, succumbs to the allure of the mezzo-soprano, priestess of a rival cult. He is blinded and then, at the height of the pagan merrymaking (Saint-Saëns had been vacationing in North Africa, and borrowed a lot of local color), Samson’s god restores his strength and is avenged. The collapse of the Temple after twenty minutes of thumping good Bacchanale is sure-fire. Audiences leap to their feet and scream with joy.
Except at the Met in Darko Tresnjak’s new production. Mr. Tresnjak has a stage-high blue metal idol 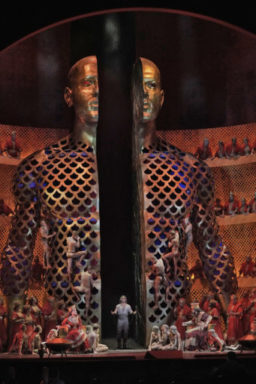 of Dagon, constructed as a cage full of writhing dancers. Okay. He presents a rather tedious ballet of nude men choreographed by Austin McCormick. Okay. The identical red costumes of the Philistine multitude resemble what Adelina Patti wore to play Rossini’s Semiramis in 1874, just to show how out-of-style pagans are. Okay. And then out comes our Samson—the second Samson of the night, actually, as I’ll explain below. And nothing happens. Samson sings an appeal to Jahweh. The Philistines go, “Ah!” The curtain comes down. No columns fall. No temple collapses. No one perishes. No one in the audience leaps to their feet in delight. I do not know why the Met and Mr. Tresnjak have spent so much money and worked so very hard to kill the dramatic excitement of one of the great moments of grand opera—but that is what they have done. It’s dead. The thrill is gone. Go home.
Up to then, it’s been a quiet, glitzy but passable staging of Samson et Dalila. Roberto Alagna was unexciting but acceptable as Samson, braying a bit but with excellent French. My first Samson was the aged, braying Richard Tucker and then there was the loudly braying, aged Jon Vickers; I’m used to undercasting Samson. At least it wasn’t Aleksandrs Antonenko, who, sadly, takes on the role here in the spring. But at the end of Act II, as he lay in Dalila’s arms succumbing (understandably) to her charms, Alagna sang a painful “Dalila! Je t’aimes!” that sent shudders through the house. After intermission, it was announced that he had withdrawn from the remainder of the performance. Instead, we had the local debut of Kristian Benedikt, a Lithuanian who has been singing familiar roles (Enzo, Carlos, Ernani, Otello) all over Europe. Mr. Benedikt gave sufficient pleasure in the “millstone” scene to be rewarded by handsome applause at the final curtain.  But neither gentleman set the stage on fire. For that we had Elina Garanča, tall and slim but full-figured, who postured like Gloria Swanson (arms 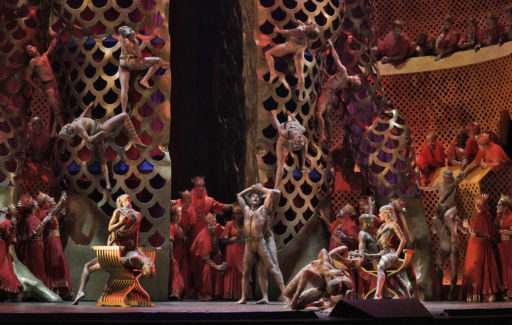 crossed on chest like a runaway mummy) and was hideously costumed (thanks, Linda Cho). Dalila is a voice for a low-voiced mezzo, and Garanča stayed there for “Printemps qui commence” and did not join in the dancing as Denyce Graves used to do in the Elijah Moshinsky production. Nonetheless, the quality of the voice burned like angry embers through “Amour, viens aider ma faiblesse,” with a few flights up to clear metallic soprano to assure us of her murderous intentions. Then came “Mon coeur s’ouvre à ta voix,” where mysteriously she softened the fires to long, sultry, yearning phrases. It was vocal acting of the highest degree, and for most of the duet Alagna was able to join her.
Garanča’s attitude in Act III was rather puzzling. She seemed to regret her betrayal of Samson, to be 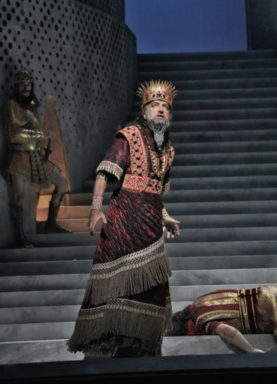 reaching out to him (he is blind now, so that was pointless) as if to apologize. There is not a note or a word of the opera to justify this choice—Dalila exults in the triumph of her god—but the director appears to have wanted to “look at things differently,” as silly opera directors so often do. It was of a piece with eliminating the catastrophe at the opera’s conclusion. There was no reason for it. But by then Garanča had done her bit, and the house was at her feet. I have often doubted the emotional commitment of this singer, but I shall do so no more—her Dalila left no wicked seductress emotions unplumbed. Dmitriy Belosselskiy sang the Old Hebrew (who warns Samson about them furrin wimmen) effectively, Elchin Azizov was a fine Abimélech, Laurent Naouri a capable High Priest, though his headdress was rather more distinctive than his singing. Sir Mark Elder conducted gently—a moody account of an Orientalist score, with all its wind colors elegantly in place, but none of the driving passion, the violent uprising of Act I, the high-octane storm of Act II, the outrageousness of the Bacchanale—a very low-key affair entirely. Perhaps he didn’t want to get our hopes up before the terrific let-down of the staging’s conclusion.
The sets and costumes were of an astonishing kitsch, hot pink and old-time crimson, flamingo-colored palm trees, lurid green and blue shadows, to prepare us for the five-story bisected blue idol and the naked boys pirouetting around it as if they were the main event. Only Saint-Saëns’ grand catastrophe could have justified all that glitz, and that was omitted. So aside from the marvelous, talented and hardworking Madame Garanča, we got nothing much. Anita Rachvelishvili will be singing the role here in the spring—with Mr. Benedikt if we’re lucky. Photo Ken Howard / Met Opera