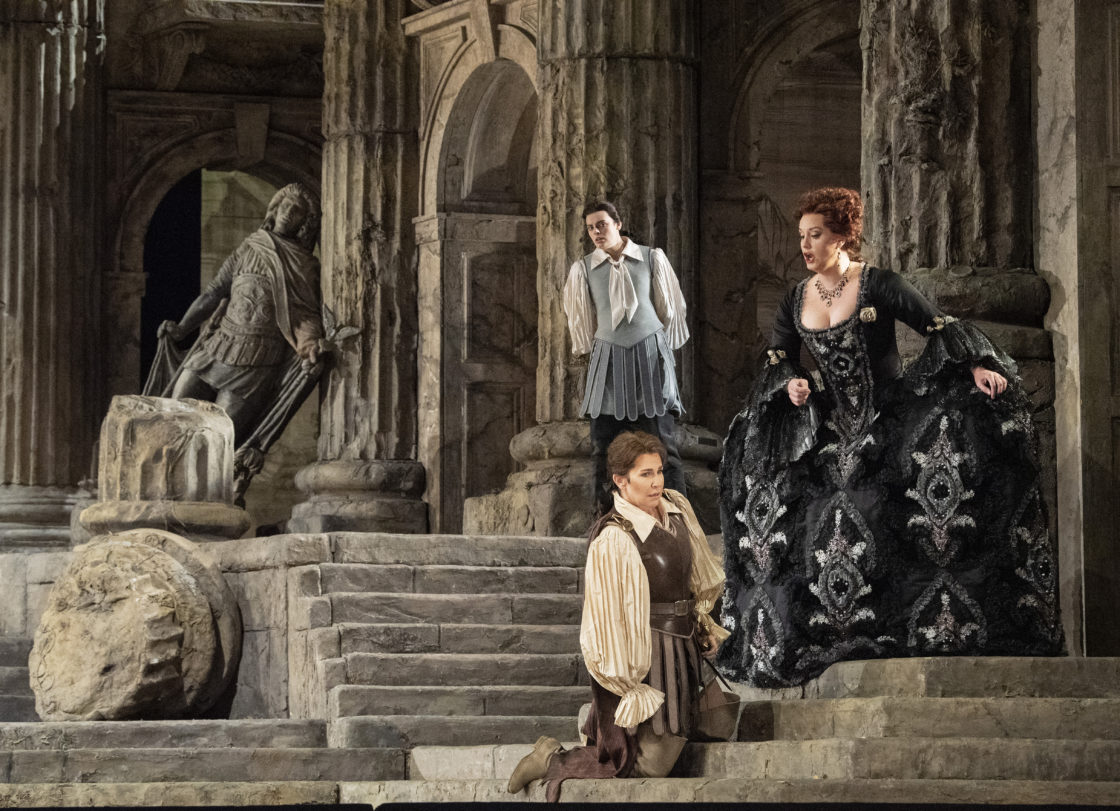 Metropolitan Opera House, New York – Season 2018-2019
“LA CLEMENZA DI TITO”
Dramma serio in due atti K. 621
di Caterino Mazzolà da Pietro Metastasio
Musica di Wolfgang Amadeus Mozart
Tito Vespasiano MATTHEW POLENZANI
Vitellia ELZA VAN DEN HEEVER
Servilia YING FANG
Sesto JOYCE DiDONATO
Annio EMILY D’ANGELO
Publio CHRISTIAN VAN HORN
Berenice ANNE DYAS
Orchestra and Chorus of the Metropolitan Opera
Conductor Lothar Koenigs
Chorus Master Donald Palumbo
Production Jean-Pierre Ponnelle
Revival Stage Director Peter McClintock
Lighting Gil Wechsler
New York, 3 April 2019
La Clemenza di Tito had never appeared at the Metropolitan before 1984, when the Jean-Pierre Ponnelle production first arrived, inspired by the opera’s earlier success next door at the New York City Opera. James Levine, too, was interested in exploring the little-known score of Mozart’s last opera, and it was one of a series of Ponnelle productions of opere serie devised at many different opera houses on similar sets of decayed Greek and Roman ruins. For the Met Ponnelle also did Idomeneo, and I have seen his Lucio Silla in Vienna. Variations on theme. Ponnelle set Clemenza in a late Renaissance Rome, replete with battered columns, triumphal arches, Piranesi dungeons and the equestrian statue of Marcus Aurelius on the Campidoglio. The Act II setting in which the chorus piously gives thanks to the Gods for the preservation of the emperor’s life is modified by a scrim, behind which the classical statuary and reclining, votive chorus appear to mingle, an empyrean picnic on Olympus—a popular subject for the ceiling frescoes of Rome. In front of the scrim, on the right of the stage, Titus stands in a theater box, gazing enigmatically down on Vitellia, his fiancée and (unknown to him) attempted murderer. 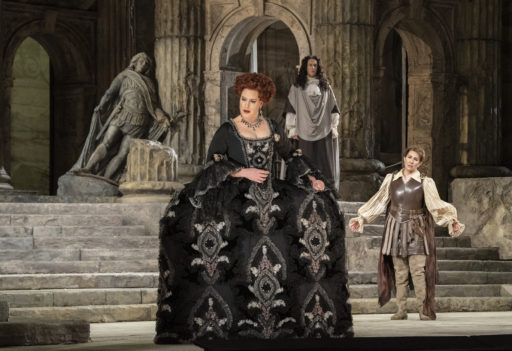 Mozart’s last opera has puzzled modern admirers of the composer’s trajectory because it seems, at first glance, a throwback to the quickly ebbing style of Mozart’s youth, when grand operas were composed to royal summons and individual arias were more important than the concerted movements and human dramas of his mature masterpieces. But if Clemenza is an opera seria at all, it’s a very curious one, the important characters cut down to two or three arias at most, a great deal of the action transpiring by means of duets, trios, choral accompaniments and orchestrated solo recits. The Emperor Leopold II, for whose Prague coronation it was commissioned, did not care for Mozart (unlike his elder brother, Joseph II), and the Empress Maria Luisa called the piece “porcheria tedesca,” German piggishness. She, however, was Neapolitan born and bred, and had never lived north of the Alps till the previous year; it was probably a surprise to her that Germans knew anything at all about music. Italians did not “get” the new style, in which the orchestra participated forthrightly in the drama and vocal display was restrained—indeed, in Clemenza, the two biggest arias are performed with clarinet or basset horn obbligato (played by Mozart’s friend Anton Stadler) sharing the honors. The first Italian who understood Mozart’s revolution, and learned his own style from it, was Rossini—who was born the following year. 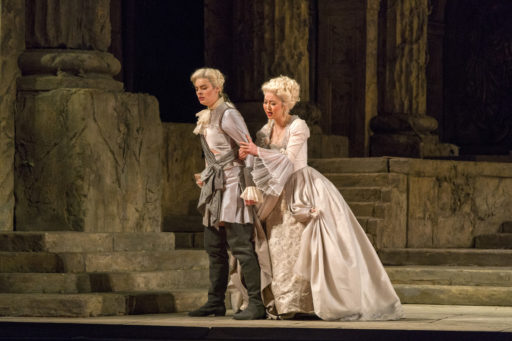 The current revival of Clemenza in the still exalted sets and costumes stars two of the company’s favorite singers: Matthew Polenzani as Tito and Joyce DiDonato as Sesto. To no one’s surprise, they give splendid performances, each in vocal prime, singing fervently, acting with elegant restraint and providing examples of Italian diction that could be understood all over the house. Polenzani has been singing roles like Tamino, Ottavio, Ferrando and Idomeneo since the ‘90s. His voice has gotten larger and darker over time, and lately he’s been singing roles like Verdi’s and Puccini’s Rodolfos, Wagner’s David and Bizet’s Nadir, all without losing the suppleness called for by a bravura role like Tito. He has never taken on a part for which his voice was not well suited and fully prepared, and his intelligence is matched by the beauty of his tenor. Tito is a very internal role, as the emperor wrestles with tyrannical impulses to which he refuses to yield, and hopes for a true relationship, marriage or friendship, that ill luck and his sense of duty forbid him. Polenzani, who recently sang a much admired lieder recital at Zankel Hall, can express such self-exploration without overstepping good taste. Di Donato’s Sesto matches him, her entire manner of vocalizing, the color of the voice and the mood of it, as the character’s mood is torn between extremes, as in the twists and turns of “Parto, parto,” the role’s most famous number. Anguish is, like joy, an emotion that Di Donato expresses perfectly, shade to shade and phrase to phrase. The third of the principals at this performance, Elza van den Heever as the two-faced and serpent-tongued Vitellia, had not so happy a night. She lacks a natural gift for florid music. Her voice, though often warm and sizable, lurched sloppily out of rhythm and out of pitch when she attempted coloratura display. Her lowest notes—and her 11 o’clock number, “Non piú di fiori,” ranges all over the scale—were croaked rather than sung. Her acting was silent-film gaudy and her height made an unfortunate impression beside Di Donato’s short, compact figure. The director of this revival, Peter McClintock, did his best to put the singers on different levels of the set’s broad staircases, but still, in their duets, the singers gave the impression of a mountain climber determined, in the face of all odds, to scale Mount Van Den Heever, an unreliable volcano, apt to shoot stars or ashes by turn. 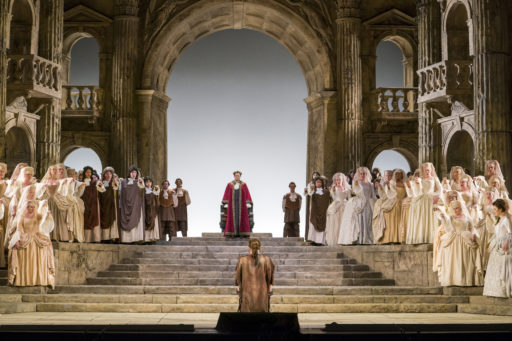 Emily D’Angelo made a generally good impression as the obsequious Annio; her voice of decent size and color though her pitch was occasionally imprecise. Ying Fang’s Servilia made a happy moment of her single aria—if one forgets how Hei-Kyung Hong (then new to the house) made the world pause to circle around her and her character’s distress back when the production was new. Christian van Horn harrumphed and postured—the role of Publio doesn’t offer him much else to do—but his basso, which did not overwhelm as Mefistofele last fall, lacked force and sensuality on this slighter occasion.
The majestic sets and the serene movements called for from the chorus all fell happily into place, but I was less than thrilled with Lothar Koenigs’ conducting. While carefully serving the singers, keeping dynamics low for their florid work and guiding tempi when Ms. Van den Heever was getting herself into trouble, he did not shape the proceedings to the maximum dramatic effect. Nonetheless, it was a performance that gave great pleasure and illuminated the potential of this often brilliant score. A well-filled mid-week house appeared to appreciate the exceptional nature of the event. Photo: Richard Termine / Met Opera