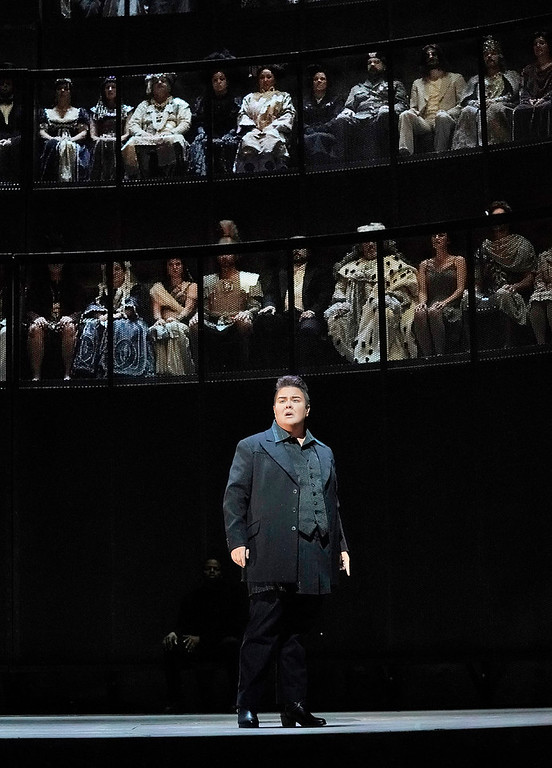 New York, Metropolitan Opera – Season 2019-20
“ORFEO ED EURIDICE”
Opera in three acts by Ranieri de’ Calzabigi
Music by Christoph Willibald Gluck
Orfeo JAMIE BARTON
Euridice HEI-KYUNG HONG
Amor HERA HYESANG PARK
Orchestra and Chorus of the Metropolitan Opera
Conductor Mark Wigglesworth
Chorus Master Donald Palumbo
Production Mark Morris
Sets Allen Moyer
Costumes Isaac Mizrahi
Lighting James F. Ingalls
Choreography Mark Morris
New York, 29 October, 2019
There is no version of the Orpheus myth from any of the classical playwrights—it’s a one-character tale, with no confrontation worthy the stage. But opera so extols the power of music that operatic treatments were a matter of course from the moment the new form was devised. Monteverdi, and most other composers of the baroque who created such operas, filled out the action with subsidiary characters. Gluck, 150 years later, in one of opera’s periodic times of “reform,” focused on Orpheus himself and his personal evolution during his mythic adventure. In the French elaboration of Gluck’s Viennese original, the role of Euridice is somewhat fleshed out, but it is still Orfeo’s myth, Orfeo’s travail, Orfeo’s grief that are front and center. 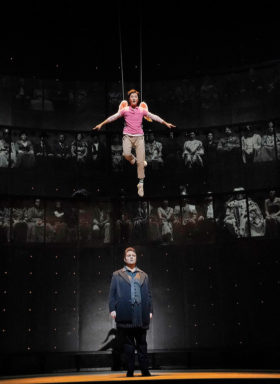 The Metropolitan Opera’s production, staged and choreographed by Mark Morris, is designed to make as much use of the five-story-high stage of the opera house as possible—but with a hearty nod towards acoustic effects. This it achieves by featuring a chorus of historical figures from all ages, high in the air in three semicircular rows of seats, who observe and “comment” on the action. They sing the mourners, furies, spirits of Elysium, who are enacted on ground level by Morris’s dance company, dressed in everyday casual wear designed by Isaac Mizrahi. (Black for the Dance of the Furies, white for the spirits of the Elysian Fields, every color for the concluding triumph.) The intent is to show the world, living and dead, bound up in the story of rescuing a beloved spouse from death, to which Gluck (on the orders of Maria Theresa) tacked a happy ending that has no part in the legend. It isn’t true: You don’t get the dead back if you love them enough. You don’t lose them because you have not loved them enough. Maria Theresa, who commissioned the opera for her beloved husband’s Name Day in 1762, found that out when he died, three years later. An entire universe of other characters aside, this production of Orfeo, like most of them, centers upon the principal character. Created for David Daniels (who perfectly incarnated the Johnny Cash-inspired “Man in Black”-with-guitar duds devised for him by Mizrahi), it was later taken on by Stephanie Blythe. 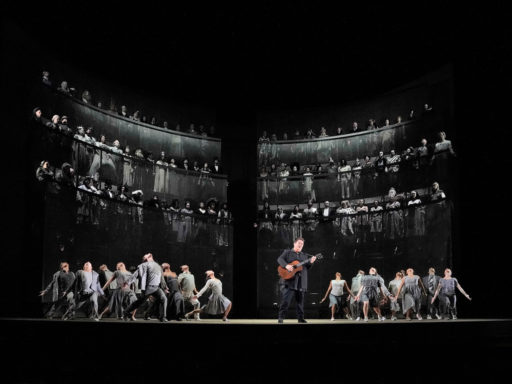 The current revival stars Jamie Barton, a southerner, like Daniels and therefore familiar with the Cash mystique. Barton is a favorite among young American singers, and her clarion, wide-ranging voice of great evenness, color and technical assurance, besides her ebullient personality, account for this. If anything, her “I can sing anything you can sing” good cheer rather detracts from her performance in roles that call for introspection, sorrow, self-pity or morbidity—emotions that do not come naturally to Barton’s expressive palette. I have heard her give effective lieder programs, and do not doubt her musical intelligence and sympathy. 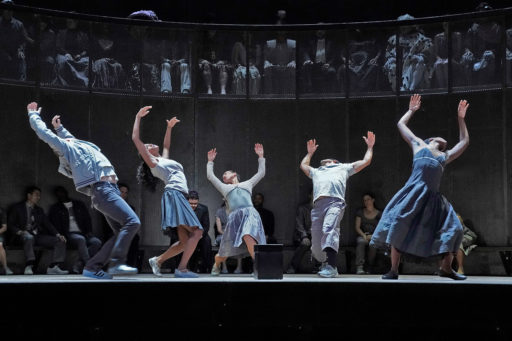 But though she glides through Gluck’s music strongly, one does not feel the sorrow, the frantic distress, that Daniels, as great an actor as he was a singer, brought to the part. Barton’s Orfeo falls agreeably on the ear, and her triumphs are shared—but not the dark loneliness of Orfeo’s soul. She sings like a prizewinner (and Barton has won them all), but Orpheus is a demigod, with a demigod’s discovery of the limits of his power. When Barton has lived longer (she is 38) and is less sure of herself, her Orfeo will be the more worth hearing. Euridice was entrusted to Hei-Kyung Hong, whose flawless career at the Met has lasted as long as Barton’s lifetime. She is still a beautiful woman and an effective actress, her Gluck fills the house easily and is perfectly phrased, as her Mozart has always been, with barely a hint of age or effort. But her emotions, too, did not seem terribly involved in the great duet of fear and recrimination that occupies the second act, as the lovers climb through Allen Moyer’s magical cavern of sparkling stalactites. Hera Hyesang Park performed Amore with the tomboyish brashness Morris has chosen for the character, and with a very promising and sizable lyric soprano. The Metropolitan Opera Orchestra has a rather nineteenth-century sound for its Gluck; the Early Music movement has got us accustomed to something more refined. But Early Music would not have filled the Met, even resounding from the semicircular amphitheater of the set. Mark Wigglesworth led a swift-paced if unsubtle account of the score, which was performed without intermission.Photo Ken Howard