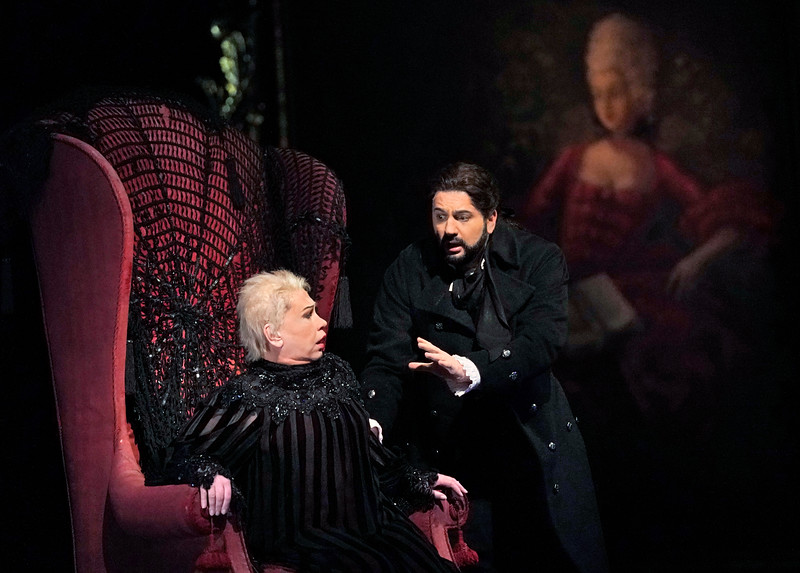 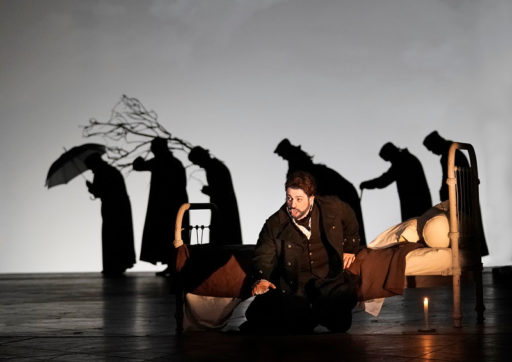 By the time it opened last week, the tenor had canceled, first, three of six performances, then all of them—a relief considering his atrocious vocal estate last year—and the soprano had decided Lisa no longer lay in the best part of her voice. Therefore we got the New York debut of Norwegian soprano Lise Davidsen as Lisa and last year’s Dick Johnson, Yusif Eyvazov, as Ghermann. These two singers led a performance last Thursday (the third of the run) in which every singer in the opera’s enormous cast was of exceptional quality. There were, vocally and dramatically, no weak points in this swiftly-paced and multi-facted grand opera and ghost story, with its eighteenth-century pastiches and scenes of scenic glory, plus a focused and minimalist macabre.
Davidsen is drawing most of the headlines. She has a gleaming, metallic, full-bodied soprano that sounds exciting when she sings from the rear of the stage and explosive when she comes down front. 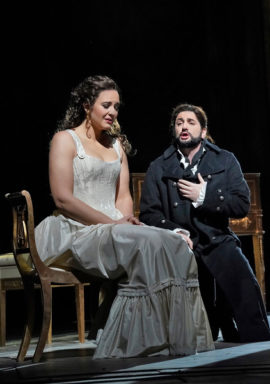 She can make it as loud as you like, and seems tireless. She is a tall, slim, handsome woman easily able to sing an amorous duet on her knees as the staging requires. How she would handle the great Wagner and Strauss and Janacek roles is the question that filled all minds—she possesses the gleaming top with considerable more assurance than Christine Goerke or Nina Stemme, but has she the weight of middle voice where Wagner tends to linger? Tchaikovsky’s Lisa is a neurotically passionate Russian heroine, and she daydreams high before exploring her soul in lower-lying strophes. Too, the Russians around me were very impressed with her diction, and even thought her a native speaker of their language—I assume she can handle German as well.
But Lisa does most of her singing in two or three scenes of this opera. It is the haunted, desperate, half-mad Ghermann who focuses the piece—and he’s central to all seven of its scenes. It’s a role for a dramatic tenor who holds intensity in reserve, prepared to let it out at all times. 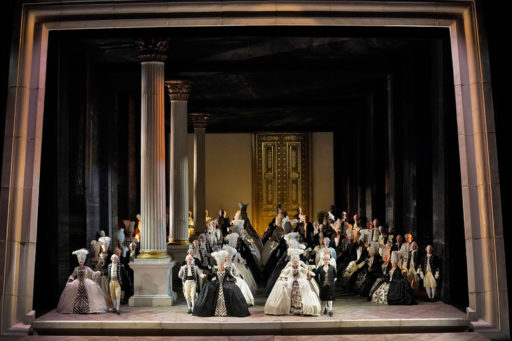 Jon Vickers and Placido Domingo did well in this role, and the handsome, old-fashioned Elijah Moshinsky production was headed by the turbulent Gegam Gregorian when it was new—but more lyric tenors like Nicolai Gedda have gotten away with it. Tchaikovsky knew how to let a voice perform, act, sing suavely or passionately without crowding the moments with heavy instrumentation. He knows how to stand back and let a lyric voice sway us. Nonetheless, Azerbaijani tenor Yusif Eyvazov, who coaxed his attractive instrument through La Fanciulla del West last year, gives an astounding performance as the haunted hero. It is never easy to be sure if Ghermann is obsessed with greed or by yearning for the socially superior Lisa—does he just want money, or does he want money because he wants her? In Pushkin’s story, the girl is a cipher and a tool, but the Tchaikovsky brothers give her and Ghermann souls along with tunes. 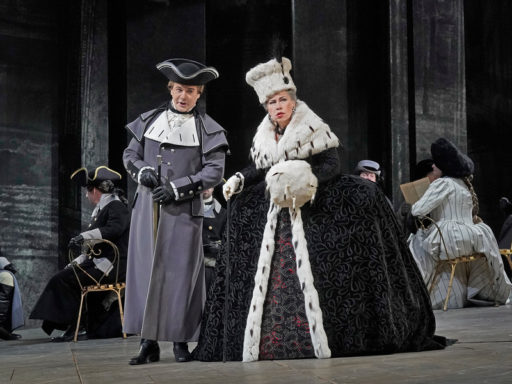 Eyvazov plays all desperate determination. He lingers and looms in the crowd scenes, wearing jet black—everyone else is in black-and-white until the dead Countess appears in Act III in a crimson ball gown, singed by hellfire along the hem. The handsome costumes and narrow sets are by Mark Thompson. Eyvazov holds the imperial spaces of the Met stage magnetically when he is alone upon them with the demons that lurk in his singing. His voice never loses its attractive quality when he whelms Lisa with his perhaps insincere lovemaking, or the Countess with his raging need for her secret. (Is the secret of the Three Cards real? Does she know what he is talking about? She says nothing; she stares, and dies. Her return from the Dead may be his hallucination). 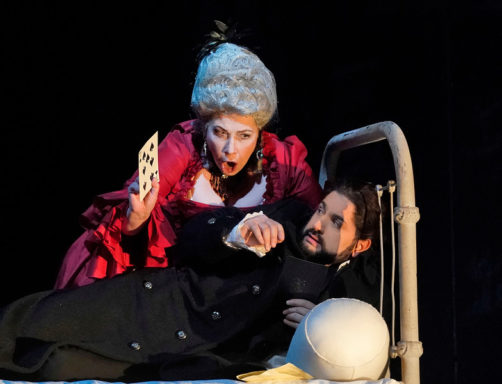 Passion does not undermine Eyvazov’s lyricism, and his hysteria never transgresses bel canto. This is a major role, and he gives a star-making performance in it.
Larissa Diadkova, whom I first heard as a Met Azucena twenty years ago, has sung most of the great Russian mezzo roles at the house. Singers often save the Countess for their last years, when only shreds of voice remain—you can get away with that—it may even be more appropriate. I heard Resnik, Rysanek, Söderström and Anny Schlemm. But Diadkova has plenty of voice and plenty of power, and her Grétry aria is no faded whisper. Too, she has always been a superb actress, and her flailings at the apparition in her bedchamber are as convincing as her malevolent emergence from hell, a glowing hole in the floor.
Jill Grove is effective as the Governess, Elena Maximova unextraordinary as Polina (the role that made Olga Borodina a star when the production was new). 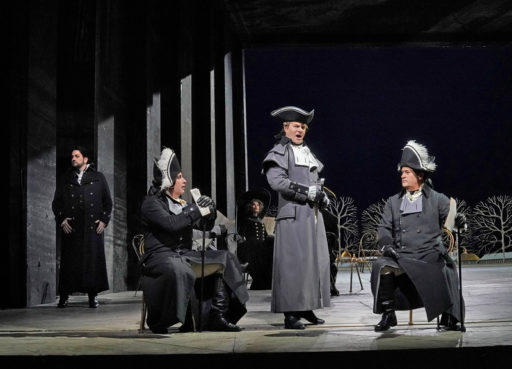 Igor Golovatenko’s Prince Yeletsky sounded first rate, but he does not look remotely like Dmitri Hvorostovsky, so for once one understood why Lisa is unimpressed by his longing for her. Alexey Markov and Paul Groves were excellent in the necessary roles of the officers whose ghost story drives their foolish comrade Ghermann off his nut. Weak or awkward link in this array was there none.
Vasily Petrenko understands the romantic, neurotic underpinnings of Tchaikovsky’s delicate scoring and hurtling, predestined, pointed weapon of a plot. 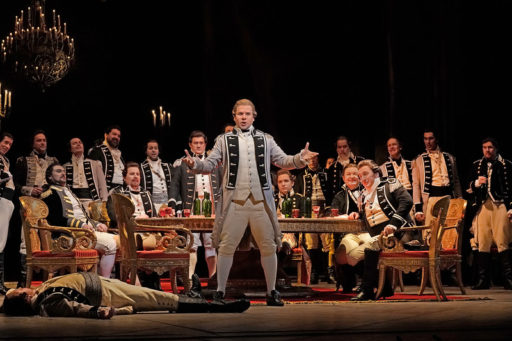 He led a sweeping, high-colored performance of this surging melodrama, and he did not stint quality in the “breathers,” the intrusions of a more relaxed sound, Russian parlor song, children’s soldier-march, Mozartean serenata, Grétry aria, the mourning song of the dead Countess that Ghermann hears—or thinks he hears—from his room in the barracks. All of these musics attempt to tell the background story, ordinary people living ordinary lives, background to the insanity of Ghermann and the folly of Lisa, and they sounded not ordinary but sparkling. There’s an enjoyable world out there, if only Ghermann were sane enough to reach it. The Met has given a masterpiece just the high-class treatment it deserves. Photo: Ken Howard / Met Opera