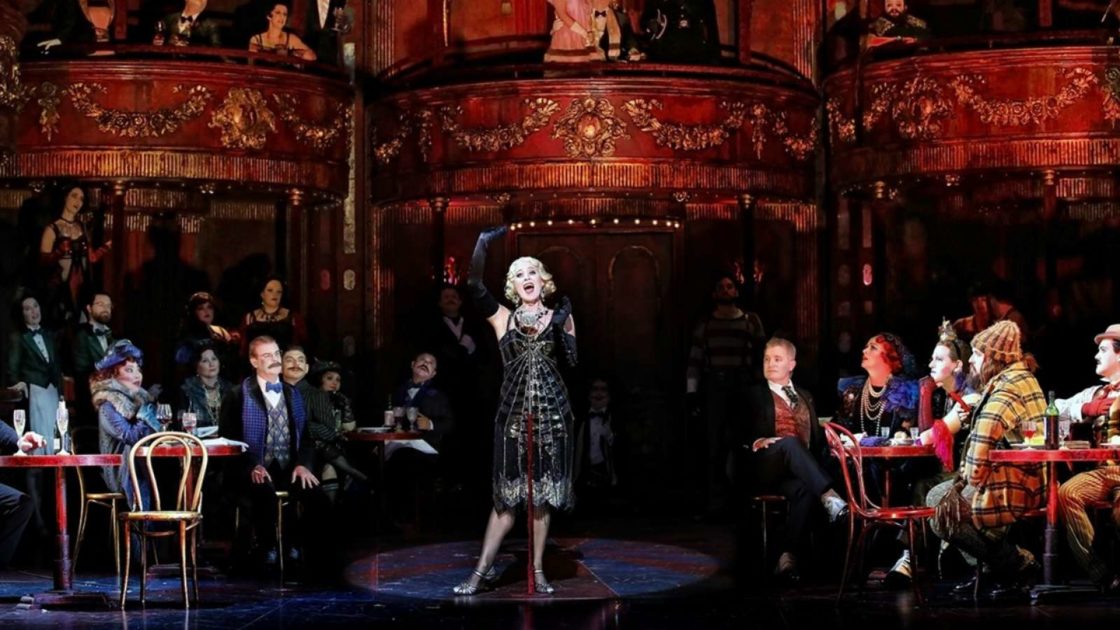 However the enthusiasm of the capacity audience at the performance of La Bohème on 2nd January would seem to confirm the popularity of the choice of programming and considering that this production has been revived annually since its first appearance in 2011. The sets designed by Brian Thompson are very striking and cleverly exploit the height of the very small stage, managing to give the scenes a sense of space and airiness. The high wire fences give a real sense of control and foreboding at the customs gate. Surprisingly in the first act a skylight or window was a missing feature in the garret which would provide light for the painter Marcello or moonlight for Rodolfo’s “Che gelida manina”……“ma per fortuna, è una notte di luna, e qui la luna…l’abbiamo vicina.” The quick scene change in the second act was done deftly and efficiently opening up a rich and elaborate set. But the choice of the original director, Gale Edwards, to move the setting from 1830s Paris of Louis Philippe to 1930s prewar Berlin proves problematic. It leads to incongruities and confusion at all levels, notably in the change of location and between stage directions and libretto. References made about Paris and Louis Philippe are senseless. The second act requires a strong suspension of disbelief to accept how children and a toy seller would come to be in the sort of cabaret establishment represented instead of the original Parisian cafè with its heterogeneous cross section of society. The carefree, exuberant, reckless and flamboyant camaraderie of the bohemian students in a lively Parisian cafè is a necessary foil for the growing awareness of the harsh reality of life, and the desperation and pathos to follow. This lightheartedness is sacrificed to a dark underlying atmosphere of the rise of nazi Germany. The decadent side of Berlin in the 1930s is superimposed artificially onto the story, and distort the much more spontaneous spirit of the original. Puccini’s very explicit and detailed stage directions and descriptions of the characters throughout the opera are integral to his score. The music often underpins the actions. In the first act where pizzicato violins represent the flicking of water on Mimì’s face to bring her around. To ignore the directions is to lose the meaning. The costumes, designed by Judy Lane, made a stand out contribution, effectively characterising individually each character on stage and enhancing them with a distinctive personality. Even so, the appearance of Mimì in a negligee in the last act seemed an incongruity and Musetta’s slinky number in the second act although in keeping with her surroundings and the staging, belied the coquettish and teasing text.The lighting design, by John Rayment, was used to its most effective in bringing to life the cabaret and the background behaviour in the second act, and creating a very realistic, tired and heavy atmosphere of dust and mist in the half-light of daybreak in the third act. The run-down bureaucratic customs’ post acts as a strong frame to the desperation of the unfolding situation of the main characters. It was a pleasure to listen to the full round timbre of Karah Sonks singing but in her portrayal of Mimì her stagecraft was very limited and she often preferred to sing forte, albeit beautifully, in some of the more expressively soft intimate moments. Kang Wang was an engaging Rodolfo, vocally secure and with a relaxed and convincing stage manner. Julie Lea Godwin’s Musetta although conditioned by directorial choice as brassy and brash sang and moved with shine and brilliance.Samuel Dundas’s portrayal of Marcello was the most convincing performance of the evening due to his excellent Italian articulation, a warm timbre, a smooth emission and easy stage manner. Richard Anderson’s overall performance as Colline was very well calibrated within the group of friends and his aria “Vecchia Zimarra” was all the more touching for its directness and lack of maudlin sentimentality and vocal exaggeration. Vocally Michael Lampard as Schaunard was not balanced with the other three voices and although his character is the most flamboyant, his part often did not emerge. On the whole though, the ensemble singing and acting in the first and fourth acts, which are so often stilted, were excellent and absolutely convincing. To this we may include the effortless and entertaining cameo of Graeme MacFarlane’s Benoît and Tom Hamilton’s Alcindoro. Clifford Plumpton’s Officer, Malcolm Ede’s Sergeant and Nara Lee’s Parpignol we’re valid and solid part players.The Opera Australia Orchestra, under the conductor Carlo Goldstein did not disappoint. The emotional impact of the opera was largely due to their sensitive, expressive, clean and balanced playing. Carlo Goldstein never allowed the tempi to wallow but allowed enough elasticity to give the performances shape and form. The Opera Australia Chorus, Children’s Chorus and Actors acquitted themselves with aplomb vocally and through the experiment of their recognised stagecraft. Photo Prudence Upton