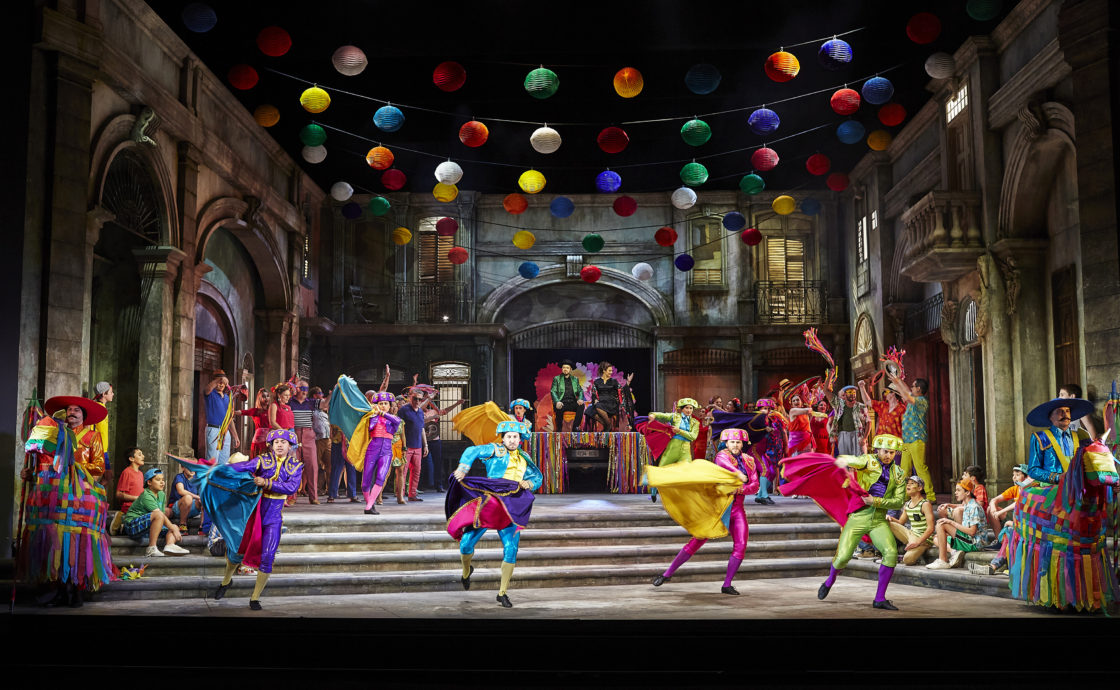 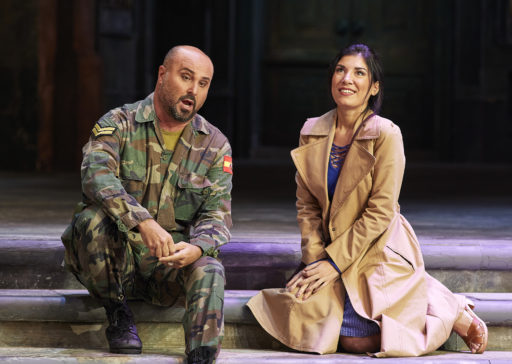 Although set in Cuba, or perhaps because of it with it’s colonial Spanish history, the staging manages to convincingly conserve the spirit of the original; an exotic, colourful and vivacious setting, hot-blooded passion, and a hint of seediness. The dissoluteness that shocked Bizet’s original audience fits a decadent Cuba very well. Every aspect of the original director John Bell’s stage direction in Carmen, is cohesive and consequential. The performance of each character in any given moment is simultaneously connected to the wider action smoothly passing in and out of the spotlight accordingly without seeming contrived. Everyone on stage demonstrates to be clearly aware of the sense of their role and the dynamic tension they create is absolutely convincing. Bell’s very richly detailed and linear direction is further vitalised and strengthened by the exciting and imaginative choreography of Kelley Abbey which literally propels the opera. 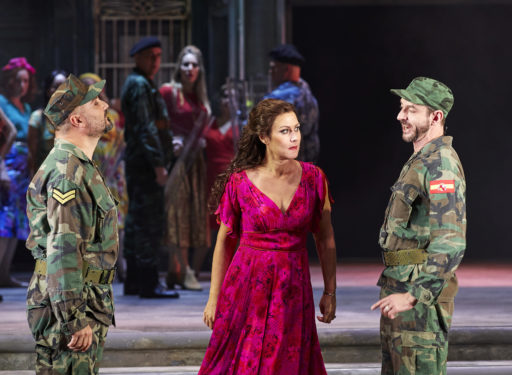 Her choreography is remarkable. She transforms the excitement of the original Spanish dancing with a powerful and engaging choreography including a spectacular hip hop and break-dancing routines by the street urchins. The build up from a sensual salsa style routine at the beginning of the second act to an energetic frenzy, is exhilarating. The crowd scenes are handled with flair and imagination. The clever and astute device in the last act of the crowd observing the procession as if it were in the audience, extends the limited spatial area and brings the usually sidelined chorus to full frontal protagonist. The effect effect of the direct contact with the audience is galvanising: one of the many examples of Bell and Abbey’s extraordinary solutions. Troy Honeysett’s realistically choreographed fight scenes is inserted with smooth authenticity. 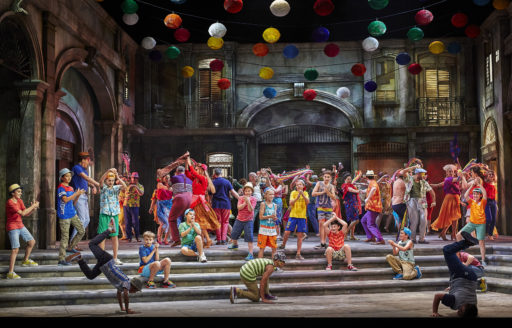 The set Designer Michael Scott Mitchell makes intelligent use of the small opera stage, leaving an all-purpose unchanged background set for the duration of all four acts; a corner end of a small town square lined with rundown and decaying buildings and a foreground space with a set of long, low, oblique steps. For Lillia Pastia’s tavern he brings on a street food van surrounded by fold up tables and chairs. In the third act the smugglers’ truck backs through what has been the garage roll up metal door of the factory in the first act and a street entrance for Escamillo’s parade in the fourth. Trent Suidgeest’s lighting design is a crucial element in rendering the single set credible as four locations. The subtle and shifting gradations which imperceptibly accompany emotional and temporal changes are just as impressive as the sudden explosion of light of the arrival of the street food van, the string of lights strung up across the plaza, or the dazzling bright high-lighting of the dancers. Teresa Negroponte bold costume design is stunning, endowing the staging with vibrancy and feistiness. 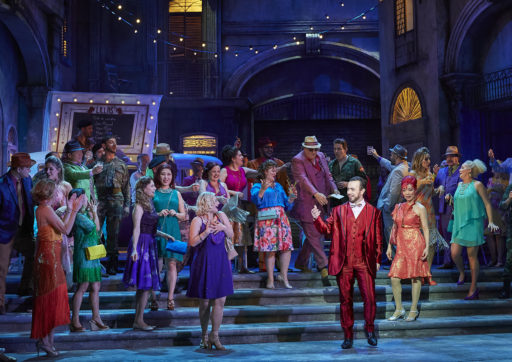 It adds vivacity, colour, attitude, dimension and personality to each and every stage presence, from the battle fatigues of the soldiers (Morales, a Fidel clone) with perspex riot shields in the factory quarrel, to the cheap and skimpy sensual attire of the girls. The dazzling visual impact of the salsa routine, with colour coded male dancers dressed ostentatiously as gangsters is ablaze with shiny, gaudy, multicoloured synthetics. The hip outfits of the street kids are refreshingly believable. The Mexican style, colourfully crafted paper maché horses and the tawdry colours of the traditional picadors, matadors and toreadors costumes in the procession before the bull-fight are all congruent. Not being able to rely on traditional Spanish dress, it is interesting to observe how Carmen’s costumes over 4 acts charter her rise in status and situation arriving in the last act in a stylish, elegant, black sleeved, below the knee length frock. 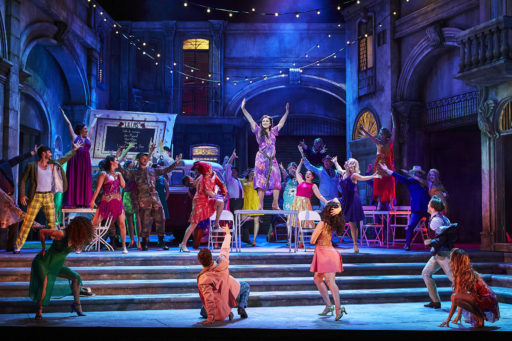 Inversely Don José’s downward spiral is mirrored by a gradual decline in the quality and style of his clothes.On the opening night the fine cast was well matched. Veronica Simeoni gave a very convincing portrayal as Carmen. An even, warm, and expressive vocality, her interpretation was committed. Her sound production was always controlled displaying both dramatic power and in the more languid passages, refined nuance. Her acting ability was noteworthy and her physical presence commanding. Roberto Aronica’s interpretation of Don José was much more straightforward. His acting was convincing and his strong tenor rang out powerfully. A softer, less affirmative approach to his aria La Fleur que tu m’avais jetée would have conveyed the needed pathos. Claudia Pavone was a splendid Micaëla. Endowed with a voice quality of captivating beauty she soared confidently and seamlessly into the high register and warmly into the lower. Her performance was polished and moving. 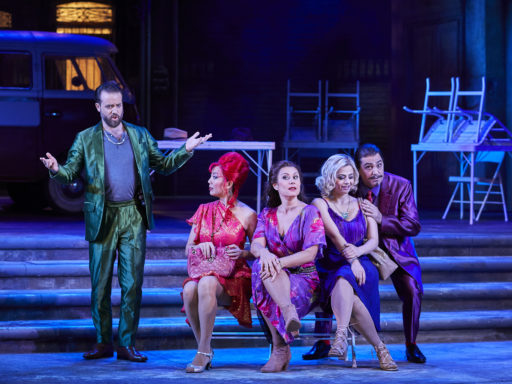 Far from the frequent portrayal as a timid village girl this Micaëla is brave and tenacious: a strong and passionate foil to Carmen’s fickleness. Łukasz Golinski was a solid Escamillo but the charismatic personality of the toreador could have been reinforced by a more assertive engagement and stronger projection of the text. Sitiveni Talei was a perfectly cast Morales. With a firm, easy delivery this Fidel look-alike also had a wonderfully relaxed stage manner. Anthony Mackey’s Zuniga sang with a focussed and secure vocality and acted the officer with appropriate authority. Beautiful and precise ensemble singing from the quintet in the second act. Carmen and her four friends Dancairo, Alexander Hargreaves, Remendado, Virgilio Marino, Frasquita, Sharon Zhai and Mercedes Agnes Sarkis wove an intricate and articulate web of dialogue in a cascading string of phrases in perfect synchronisation. 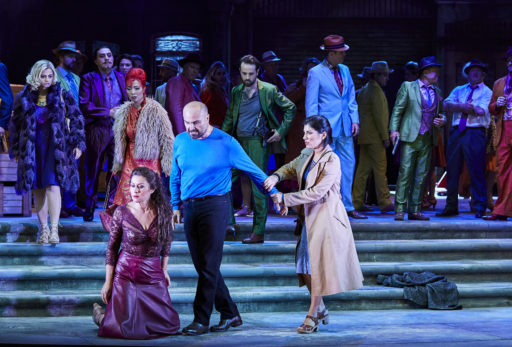 Their clear, focussed voices were perfectly balanced, in a constant play of contrasting colours and dynamics and further appearances in the following acts were just as incisive and calibrated. Their characterisations were well defined and full of personality. All the singers had to contend with the fast and unyielding tempi. The conductor Christian Badea took the opera art breakneck speed from beginning to end. The prelude and entr’actes not having words to contend with were taken ever faster and any musical characteristic of significance was levelled. The opera was driven relentlessly ahead without leaving the singers or instrumentalists a moment of elasticity. Any hope of dramatic musical tension was abandoned. Even the premonitory leitmotiv of death which returns cyclically throughout the opera passed without a trace. 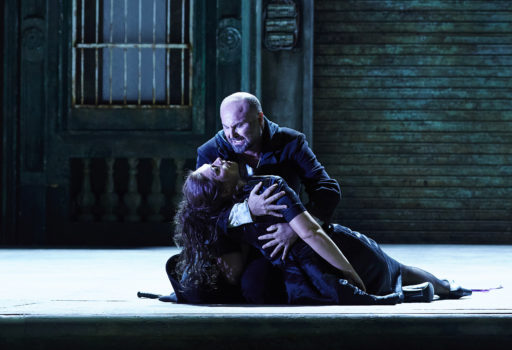 Despite the challenging tempi the orchestra gave a vibrant performance playing with their usual precision and panache. As mentioned above, the dancers both juvenile and adult were impressive. The chorus gave an outstanding vocal and acting performance. Theirs the most carefully honed French of the evening, far surpassing that of the main soloists.Whatever specifically Spanish features may have been lost in the transmigration, this relocation conserves much of the original spirit and delights with its throbbing, highly charged and compelling production. Photo Keith Saunders