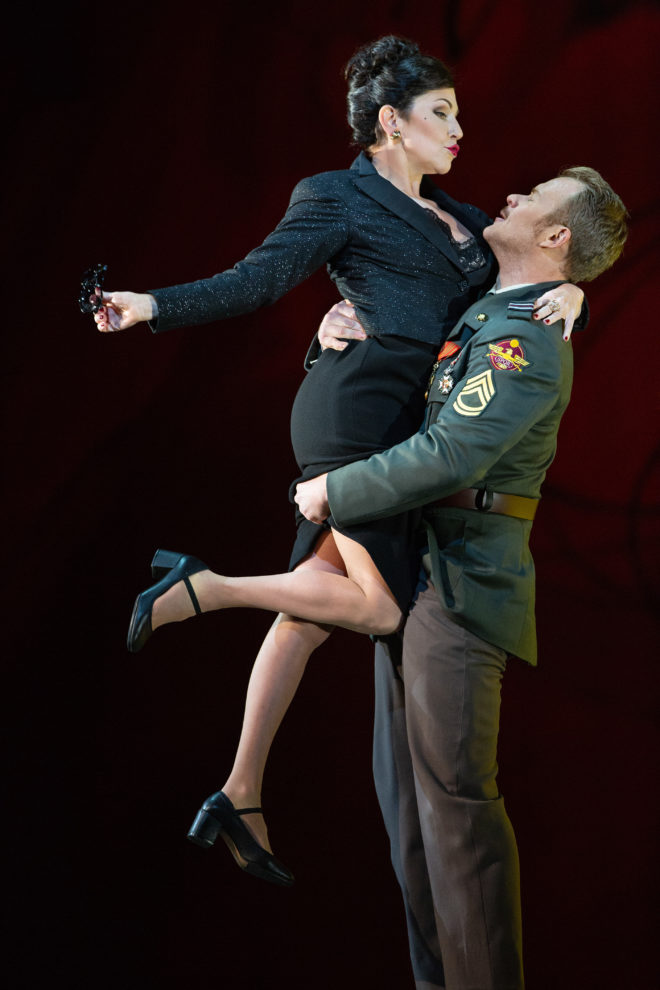 New York, Metropolitan Opera, Season 2019-20
“AGRIPPINA”
Opera in three acts on a libretto by Vincenzo Grimani.
Music by George Frideric Handel
Agrippina JOYCE DIDONATO
Poppea BRENDA RAE (debut)
Nerone KATE LINDSEY
Ottone IESTYN DAVIES
Claudio MATTHEW ROSE
Narciso NICHOLAS TAMAGNA (debut)
Pallante DUNCAN ROCK
Lesbo CHRISTIAN ZAREMBA
Onstage harpsichord solo Bradley Brookshire
Orchestra of the Metropolitan Opera
Conductor Harry Bicket
Production Sir David McVicar
Set and Costume Designer John Macfarlane
Choreographer Andrew George
Lighting Designer Paule Constable
A Metropolitan Opera premiere
New York, 6 febbraio 2020
This production was originally created by the Théâtre de la Monnaie/De Munt Brussels and adapted by the Metropolitan Opera.
O tempora! O mores! Agrippina! O don’t you cry for me! David McVicar’s production of Handel’s Agrippina, which had its premiere last Thursday, is the must-see show in New York this winter, whether you come for the jokey send-up of a drama of political intrigue or the brilliant performing of an exceptional cast, or to hear the only opera Handel composed for a theater in Italy. The “caro Sassone,” as they hailed him, was 24 and, after an apprenticeship in Hamburg, was busily studying the more vocal, less instrumental operatic style of the peninsula. Yet it was his way with instrumentation, his northern contrapuntalism, that tickled the Venetians, and Cardinal Grimani’s libretto delights us with its conflicts and explosions built on personality and deception.
On the stage curtain, we are shown a vast she-wolf nourishing human whelps—this represents both Rome and the Empress Agrippina herself, great-granddaughter of Augustus, sister of Caligula, wife of Claudius and mother of Nero, Nerone as he is here. There are, Oscar Wilde remarked, two tragedies in life: not getting what you want, and getting it. Agrippina’s tragedy (if this murder-free and snicker-filled show is a tragedy) is of the latter sort: she wants her son to succeed his stepfather as emperor and she will seduce, betray, stab anyone in the back to achieve her wish. She has no other desires, though she is apt to pretend she has, and Joyce DiDonato is captivatingly high energy as this deceptive flirt. She really does love us, however she may feel about Claudio, Pallante, Narciso or Poppea, the dupes who serve her turn. And those who have read Roman history—in 1709 in Venice, we may presume, everybody knew ancient Roman history—are aware that when the teenaged Nerone finally came to the throne (a few years after the conclusion of the opera’s action), his first major atrocity was the murder of his over-controlling mother.  The McVicar staging, though it originally appeared in Brussels, seems designed for the New York audience, who lapped it up, laughing and cheering. The vast Met stage is filled with John Macfarlane’s portentous sets, titanic oblong stone columns that move about (several of them containing closets, useful when Poppea has to conceal a lover or two) and the archways and distant vaults of this contraption resemble Grand Central Station at its most imperial. Between scenes 2 and 3, the street traffic of New York is projected (Paule Constable did the lighting) while Poppea rushes about the night, ending at a singles bar where she tries to drink her sorrows away and a cocktail harpsichordist (Bradley Brookshire) plays dance tunes and karaoke. Nerone, an adolescent boy (though sung by a woman), jacks off during one or two of his arias, uses a fake i.d. to get a drink, and snorts cocaine during a ritornello. Soldiers at attention twitch their butts in sync. (The choreography is by Andrew George.) Emperor Claudio, in blue warmups, whacks golf balls across the stage between roulades. All of these jokes and japes delighted the New Yorkers, perhaps because they are so unexpected on the proper opera stage.
The Met knows little of Handel—Agrippina is only the fifth Handel work the Met has presented, and the first, Samson, was given less than forty years ago. The sheer size of the theater causes distortion. Baroque singers, mostly lacking the power that thrusts across a Verdi or Wagner orchestra, are best heard in the Balcony, four stories above the stage, but the intimate shenanigans are barely visible at that distance. If you sit close enough for all the personality the performers inject into their parts, much of the singing—especially the low notes of the men—will dissipate behind a screen of orchestration, and some of the quality of the higher registers of the ladies will not be apparent. You pays your money and you takes your choice—or you must attend the production more than once, sitting in different sections of the house. Lovers of Handel singing may not find this an unpleasant chore. Harry Bicket, an Early Music specialist, makes much of Handel’s exquisitely colored accompaniments, and his rhythms are lively and forthright, but he may not have had time to adjust the sound from the pit to the attempts of the singers to be heard over it.
The entire cast is worth hearing and, in a Handel opera, each gets moments to shine. DiDonato glows with self-confidence in a series of power suits, accessorized for mourning, state meetings and the occasional boudoir scene. Her delight in skullduggery is matched by the elegant ornaments she tosses about in several registers. Agrippina must put on many cloaks to wield her several daggers, and DiDonato’s clear mezzo adopts and tosses them all with abandon. She is also involved with each of the other performers, and it is clear from the start that she understands the sexual delight of others (even her son) without valuing it much herself—a man’s nightmare of a calculating female. (Let us recall that the libretto was written by a cardinal of the Roman church.) DiDonato takes a similar attitude towards the ornamentation that was called for from Handelian prime donne: She perfectly understands what is required, but she never gets carried away. It is a well-judged lead in an ensemble production.
Kate Lindsay, another house favorite (for her bisexual Niklausse/Muse in Hoffman), is nothing less than extraordinary in Agrippina. Slim and slight, she portrays the complete spoiled teenage boy who has just discovered dissipation and is unable to focus on anything else. She/he sends up the ritual processions that (as his mother understands) are an important part of power, shows off her/his tattooed arms to impress—whoever is impressable, does one-armed pushups while facing the audience (really, Miss Lindsay!), hungers visibly for luscious Poppea, snorts cocaine during an allegro aria, is made a fool of—but triumphs in the end. The energy of all this is magnetic. And Lindsay, whose alto was so moving a year ago as Gounod’s tragic Sappho in Washington, totally inhabits this hyperactive and immature character, racing about the stage, tossing off trills and roulades of exultation or despair. Lindsay’s athletic acting is a major achievement, but her singing remains beautiful throughout, and how she can keep tossing her voice out with such beauty with the dust of all that white powder around her head is a mystery.
Brenda Rae made her Met debut as Poppea, a sex kitten in this opera as in Monteverdi’s, but one whose feelings reach different extremes in different arias. Betrayed (she thinks—Agrippina has lied to her) by Ottone, the only man she really loves, she does not go into the garden (per the libretto) but runs through traffic across town to a cocktail lounge. Here McVicar plays one of his witty tricks: in a reflective aria on the misery of love, Poppea sings the same line of ornament three times in a row. Rae sings this number to the bored bartender; she is visibly three sheets to the wind, and the repetition, precise and flawlessly intoned, fits her intoxicated state. Her lovely soprano and delicate technique are perfectly at the service of her portrayal, and we are all grateful when countertenor Iestyn Davies shows up, as uniformed Ottone, and gets her a sobering cup of coffee. Ottone was not composed for one of the spectacular castrati of Handel’s London years; it is a role of slighter compass and less flash, but Davies is immensely moving in it. He is the only honorable character in the opera, has been acclaimed as the savior of Rome in Act I and is therefore betrayed and denounced by everyone in Act II. (If you know opera seria, you will have expected this.) Agrippina was composed in three acts, but the Met gives it in two segments of nearly two hours each; the break therefore comes in the middle of Handel’s Act II, just after Ottone’s soliloquy of heartbroken disillusion. Davies holds the house to his quiet phrases, just when we expect a pre-intermission forte.
Bass Matthew Rose sings the Emperor Claudio, tall and majestic enough to achieve the proper figure of dupe and dignity. His desires (for Poppea in his bed and Ottone on the throne as his successor) are perpetually thwarted, yet he remains imperious while failing to comprehend which other character is leading him by the nose (or some other part) at each twist of the plot. His lowest notes seemed weaker than I like from a rumbustious Handelian basso, but those who sat upstairs did not detect this. Duncan Rock had similar low note problems as Pallante, one of the two imperial bureaucrats deceived by Agrippina into assisting her schemes. The other such stooge, Narciso, was sung by Nicholas Tamagna, a favorite New York countertenor making his Met debut. Narciso is a wimp, in this staging an Edward Everett Horton type, sexually twisted around Agrippina’s thumb, and Tamagna was slimily hilarious, while filling the house with his large, smooth alto.
I am still of the opinion that the Met is not the place for baroque opera, that the theater distorts the voices. But with loving attention (the McVicar Giulio Cesare, the Stephen Wadsworth Rodelinda), a set that pushes the singers to the front of the stage—and a conductor who permits them to override his orchestra—the thing can be done smartly. Agrippina offers so much good singing and merry staging that it should delight everyone who can get into the theater. Photo: Marty Sohl / Met Opera