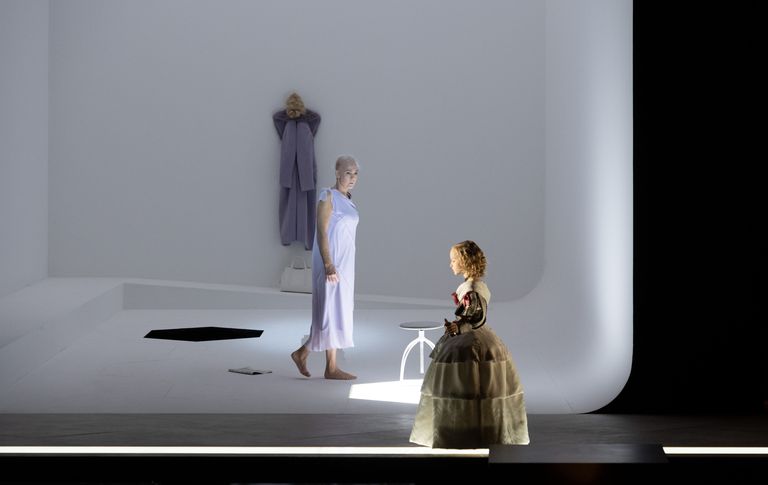 Emilia’s getting ready on the left for her appearance on the right. The same happens before the other two acts with the rooms moved to either side, for the backstage area of the second act on the left and the hotel hallway of the third on the right again. Claus Guth deploys a group of dancers as clerks, admirers and hotel staff who move busily to come to a sudden halt for frozen moments, perhaps flashbacks in Emilia’s long life or a way how she experiences reality. Time and again, Emilia shows up as a girl in a Renaissance dress (costumes by Ursula Kudrna), later as an old woman with a walking stick, anticipating her final death staged as a stumbling walk towards a big door on the right which opens into bright light. Guth employs a subtle Personenregie so that the other characters come along in a distinctive way, most of all Bo Skovhus as the mature dandy Jaroslav Prus whose baritone still sounds both commanding and sublime. Ludovic Ludha is an idiomatic and nuanced Gregor who copes with the relentless flights of tenor ardour. There is a vocally rounded performance from the English tenor Peter Hoare as the law clerk Vitek who intones causa Gregor-Prus immaculately, reaching up to the high B the first time and the B flat the second. His daughter Krista is sung by the bright-voiced mezzo-soprano Natalia Skrycka, and her lover and Prus’s son, Janek, by the appealing young tenor Spencer Britten. The sonorous bass Jan Martiník as the lawyer Kolenatý who often has a pocket bottle at hand, and the tenor Jan Jezek as a poignant Hauk-Sendorf make their own contributions to the evening’s success. Marlis Petersen does not only inhabit the lead role, she sings it with great radiance and beauty, thus conveying Emila’s mental suffering and longing for biographical identity. Her vocal precision is reflected by Simon Rattle’s conducting the Staatskapelle Berlin. The composer’s scores are considered notoriously tricky and there are overwhelming passages in Mr. Rattle’s account of this one in the sweep of the – for Janáček – unusually long prelude to give way to a Debussy-like lushness, partly at the expense of intricate details and drowning the singers. The conductor finds coherence and intense but truncated lyricism after all by drawing a performance of taut discipline from the orchestra, which results in dazzling luminosity at the end. Photo Monika Rittershaus