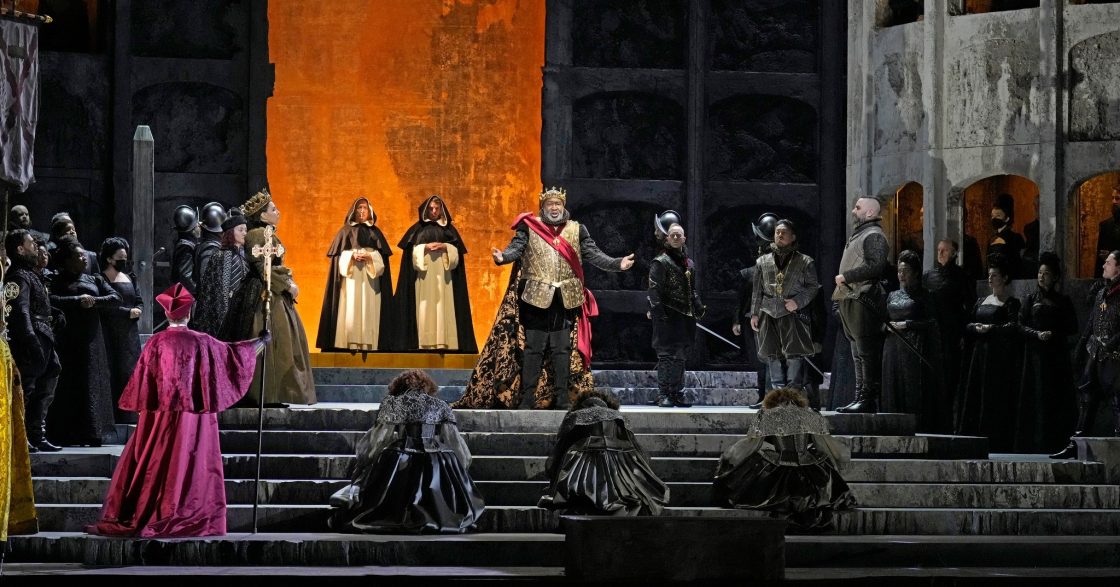 “Don Carlos” at the Metropolitan Opera The curious libretto, based on Schiller’s verse drama of political intrigue, was turned by dramatists of the French imperial grand opera into an imperial spectacle, with forests full of soldiers, monasteries full of monks, gardens full of courtiers, ballets full of legs, the public burning of a passel of heretics before an enthusiastic crowd and an assault on the monarchy by a tumultuous mob. Schiller had included none of those things—nor had he provided a ghostly friar who turns out to be the late Emperor Charles V, but all of that is what Verdi was called upon to set to music. It is bewildering and dazzling, a haunting pageant with intersecting character arcs for half a dozen of the most memorable personalities in grand opera. Little wonder that Verdi was dissatisfied with the original version, which was not a great success, and rewrote the piece at least twice, in Italian, over the next twenty years. This means that the many lovers of this opera are torn, whether they would rather hear it in the original French or the later Italian (problematic, as not all the verses exist in both tongues), and if they’d rather hear the original five-act version, the much later truncated four-act version, or the final, five-act revision. Each Don Carlos or Carlo gives something up. (The ballet is almost never heard in any performance, though it appeared a few years back in Vienna as “Eboli’s Dream.”) The four-act version is a full-length opera, but the omission of the Fontainebleau prologue (Act I) makes many later musical reflections incomprehensible. And it’s wonderful music. All of it is wonderful music. The real difficulty is rounding up six or seven great Verdi singers to perform it on the same night. At the Met, Don Carlo was, for many years, a popular curiosity in the four-act “Milan” version in a stolid 1950 production by Margaret Webster, but in 1977 that was replaced by John Dexter’s glamorous staging of the five-act “Modena” edition, with the addition of brief scenes discovered by Andrew Porter in the archives of L’Opéra. In 2010, this beloved staging was replaced by one by Nicholas Hytner. Each of these—to say nothing of the house’s premiere of the opera in 1920—used a different version of the music, and each of them featured many an extraordinary singer over the years. But the new production that opened the Met’s winter season on February 28 was novel in that (as is frequently the case in many other opera houses), the opera was at last given in the original French. Much publicity was made of this, but Carlos was not at all the same opera as the one that debuted in 1867. The duet for Elisabeth and Eboli that should open Act III, in which they exchange veils (which explains why Carlos later mistakes one lady for the other) was omitted, as it usually is, and of the ballet there was no hint. Act IV, scene 1—the dungeon scene—was played in its complete and confusing original form, as had never been done at the Met before—this allows Carlos and the King to sing a very fine duet over the body of the Marquis de Posa, the man they both loved—but twists the plot for other characters. They cannot run off to the monastery of Yuste at the end of this scene—it was a five-days’ journey in those days—but Verdi’s scenarists wanted a coup de théatre, the return of the ghostly monk from Act II, now revealed as the King’s imperial father, who rises from the tomb to take mad Don Carlos into it, to death. The Met production used the music of the Milan revision but had not the Emperor but Posa return from heaven for the prince. This is quite absurd: Verdi did not compose any music for it. It is the Monk who sings a last phrase, and in this staging, he vanished into oblivion—you had to know the libretto intimately and be searching for him in order to find him on stage. In his place we had this supernatural homoerotic frisson, which may have delighted some in the audience but had nothing to do with Verdi. Charles Edwards’s sets are very dark—black on black, in a series of galleries of long arches (usually funereal and empty, they become theater boxes for the auto-da-fé), but the black surface is unevenly painted so that, as Adam Silverman’s lights change, your mind plays tricks, visualizing archaic carvings like those of antique monastic tombs. It is difficult to visualize the gardens of Fontainebleau or the Madrid Alcazar against this, but the lighting transforms it into the plaza for the auto-da-fé, and the shadows draw in to become the king’s study in Act IV and the dungeon after that. Vocally, the initial cast of the production—which will return next year, sung in Italian—did little to interfere with our memories of many fine singers in the Bing or Dexter years. Matthew Polenzani sang Carlos, a role few would have predicted for him quite recently. Polenzani has been a leading House tenor since the turn of the century, and he has never damaged his basically leggiero instrument by pushing it beyond his capabilities, with the result that after years of first-rate Ferrandos and Taminos, his voice is now strong enough for Nadir and David—and even Carlos. He acted nervous rather than demented as this awkward hero, dismayed but not destroyed by his confusing relationships with the Queen and the Princess Eboli. His first phrases in the Fontainebleau scene were of a delectable bloom that did not linger the rest of the night, but his skill never faltered. I expect him to improve steadily in the role. Sonya Yoncheva, a soprano favored by the House, sang many lovely phrases as Elisabeth but seemed to run out of steam when sustained tones were called for. She enacted a Queen on her dignity, which was not always the persona desired for the music. Eric Owens, who has sung the King before and was pressed into service when another singer withdrew, was, frankly, not up to this noble and central role. Philippe, the tyrant with a conscience and a breakable heart, must overwhelm the opera, steal his son’s hysterical thunder, loom all but merciless over an empire on which the sun never set—and then become a man to be pitied if not admired. It is this characterization by which Verdi makes a musical tragedy of Schiller’s courtly intrigue. Owens, gravelly and overparted, was seriously out of his depth, unimpressive and feeble. The surprise of the evening was Etienne Dupuis, a Canadian unknown to me (though he has sung a couple of roles here), whose debonair baritone made the Marquis of Posa an elegant courtier and an ardent freedom-fighter, permitting neither figure to push him into vulgarity or shrillness. Vocally, he seemed to take the exact measure of the house. He was always certain and precise, and the beauty of his phrasing reminded us of Verdi’s thorough familiarity with the manners of French opera. A delightful performance by a star I hope to hear often.In contrast, the other “lover” of Carlos, the Princess of Eboli, was sung by Jamie Barton with the solid, clear, house-filling tones she usually offers but with none of the subtlety or inner heart Eboli should give us. Barton is a vocal showoff, but her Princess was vulgar, crowd-pleasing but never touching. I’m sure she knew what the words meant, but I’m not sure she understands any of Eboli’s desperate, chaotic feelings. Matthew Rose sang the Monk who may or may not be the abdicated (or dead) Emperor Charles V, and his phrases in his first scene, few as they were, made us all sit up, as startled as was Polenzani’s Carlos. It was a thrill, and a puzzle—why wasn’t he singing the King or the Grand Inquisitor with so riveting a basso? The Inquisitor was John Relyea, a puzzling singer, one who gets all the notes but sometimes makes no impression with them. His Inquisitor was direct but indistinct in the bass-on-bass duet that should be the heart of the opera. Meigui Zhang, a mezzo with the power for a knightly youth, made a sturdy Thibault, Amanda Woodbury a decent Celestial Voice. Under Yannick Nézet-Séguin, the Met orchestra, so familiar with this score, played with soaring melancholy power, the brasses echoing in the great vastnesses of the set, the beauty of the choruses resigning us to tragedy. It was almost five hours of music, but attention did not wane, and the house seemed to appreciate the seriousness of the occasion.Photo by Ken Howard / Met Opera