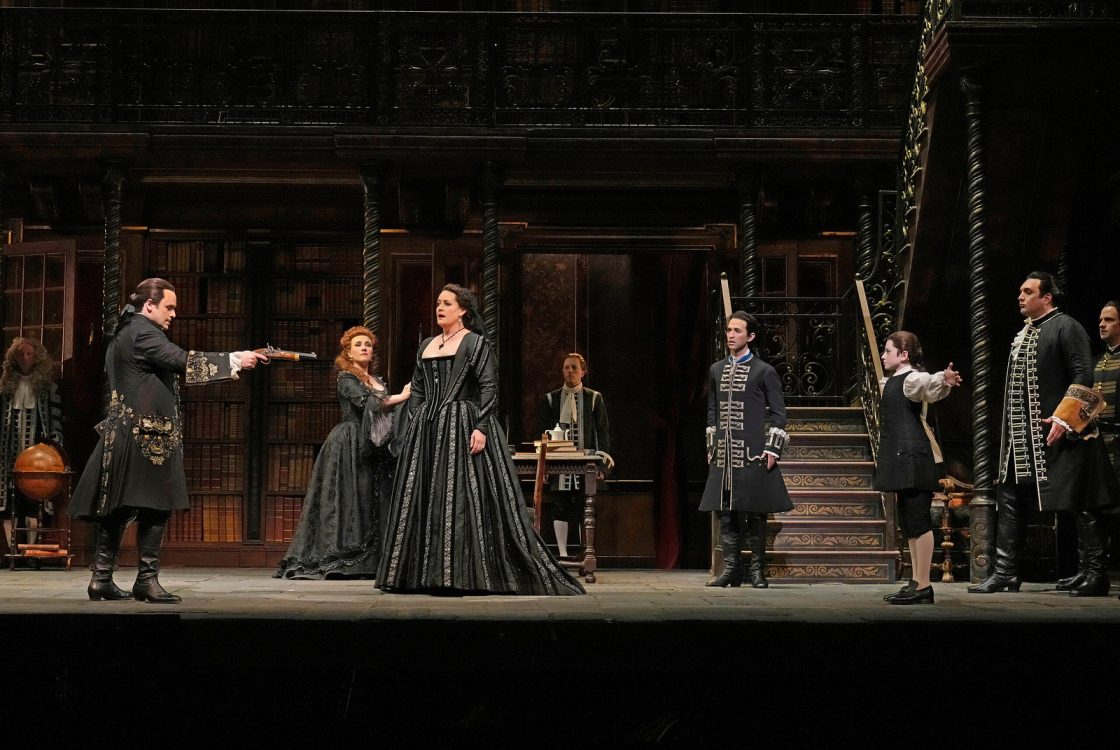 New York, Metropolitan Opera, Season 2021-2022
“RODELINDA, REGINA DE’ LOMBARDI”
Opera in three acts, libretto by Nicola Francesco Haym, adapted from a libretto by Antonio Salvi, itself based on the play Pertharite, Roi des Lombards by Pierre Corneille.
Music Georg Friedrich Haendel
Rodelinda  ELZA VAN DEN HEEVER
Grimoaldo  PAUL APPLEBY
Garibaldo  ADAM PLACHETKA
Eduige SARAH MESKO
Bertarido  IESTYN DAVIES
Unolfo  ANTHONY ROTH COSTANZO
Flavio  BRANDON CHOSED
Orchestra of the Metropolitan Opera
Conductor Harry Bicket
Production Stephen Wadsworth
Set Designer Thomas Lynch
Costume Designer Martin Pakledinaz
Lighting Designer Peter Kaczorowski
New York, 15 March, 2022
There are few productions in the Met repertory as handsome as the Wadsworth/Lynch design for Handel’s Rodelinda, originally presented here in 2005 as a vehicle for Renee Fleming, Stephanie Blythe and David Daniels. At the latest revival, the turntables that trundle the grand rooms and farmyards of a Lombard villa back and forth across the stage (that library! Don’t you want to live in that library?) were in fine working order, though some of the colors have faded, and the stage elevator that carries the entire set up one story to permit a dungeon scene in Act III was silent and faultless. Harry Bicket led the much cut-down forces of the Met orchestra with aplomb and the formal and intricate black lace gowns of the ladies made the proper regal effect. 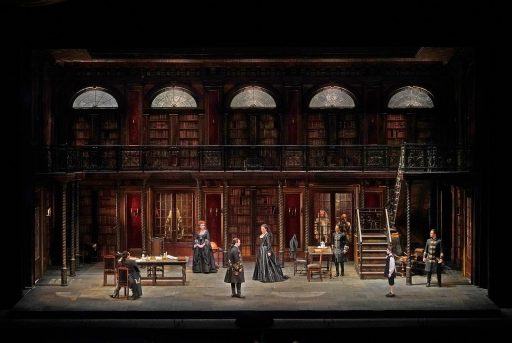 The problem is that a Handel score does not make itself at home in a house the size of the Met. Rodelinda is slow-paced and melancholy, even when characters are defying this tyrant or that (time, fate, a usurper, a betrayer). The direction of the background—the goings-on behind the long, elaborate arias of the half dozen characters (as usual in opera seria), is busy and distracting without providing interest that, in a small theater, would properly be centered on the skills of vocal adornment and emotional representation. Even a horse and a whole lot of strident running about with barbed weaponry could not keep the theater awake, and without major stars, Handel does not sell tickets. 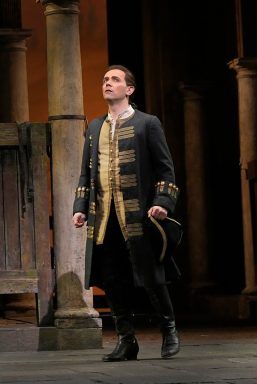 On Tuesday night, you could have played football in the orchestra or the family circle without getting in the way of those who wished to keep their eyes on the stage. You have to wonder whose idea it was to revive this opera in these circumstances. When the production was new, Fleming, Blythe and Daniels were at the height of their fame, and though Fleming was no Handel specialist, she delighted in the role; she permitted no other singer (admittedly, Handel specialists were rare on the Met roster) to take a single performance away from her. No one singing Handel at the Met has that sort of appeal today.
The singing at last Tuesday’s performance was by no means insignificant. Allowing for a certain amount of time to warm up (Act I was sleepy) and a certain muddiness of ornament, the assembled cast was highly impressive, utterly free of the hooting and humphing that passed for Handel singing in a bygone day. Elza van den Heever, whose large and variably expressive voice the Met has sometimes not seemed to know what to do with, was given the title role. She did not sound one bit like Fleming, having a less velvety, more clarion sound, but I for one welcomed the change. After a first act holding herself in, she entered the furies and tragic reflections of Act II with gusto, and the great duet, “Io t’abbraccio,” was a properly enriching climax. 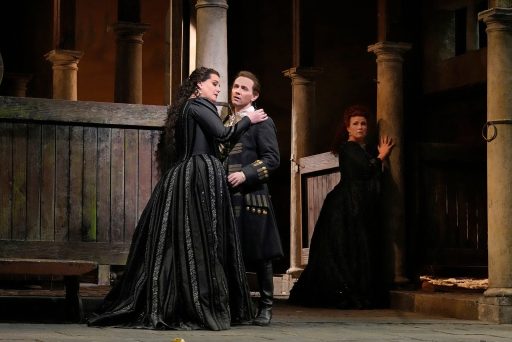 Iestyn Davies has sometimes struck me as lacking real stage instinct—the British countertenor has been ornamental in minor roles in several appearances—but in the two years since he was last heard here, his voice has grown in size without forfeiting its graceful beauty, and he now conquers the house. His Bertarido, especially in the fits of frustrated anger that torment this deposed monarch, was exciting, moving and in the proper scale, as his predecessors in the role, Daniels and Scholl, were not. His “Vivi, tiranno” capped the night and drew excitement. 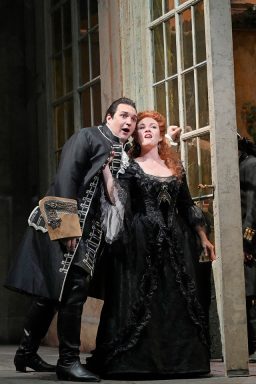 I’m a great admirer of Sasha Cooke, and had looked forward to her Eduige, but she was ill on this occasion and replaced by Sarah Mesko, a singer unknown to me. Ms. Mesko possesses the sizable mezzo and elegant technique necessary for this role, and her stage demeanor was confident and involved. Happy the company to have such backup! Paul Appleby, whom I always enjoy, was exciting and eminently musical as the usurper Grimoaldo, a man who can’t decide how much of a villain he really wishes to be, and torments himself accordingly. Handel is seldom kind to his tenors—castrati and divas were the stars in his day—but Appleby held his own with his strong, supple instrument and confident acting. Adam Plachetka sang the wicked Garibaldo with relish, his lithe, dark basso cantante plotting cheerful evil. Anthony Roth Costanzo, whose thinner, rather wiry countertenor set him off from the plush Davies sound, cut an amiable figure as Unolfo, the deposed king’s faithful aide de camp. 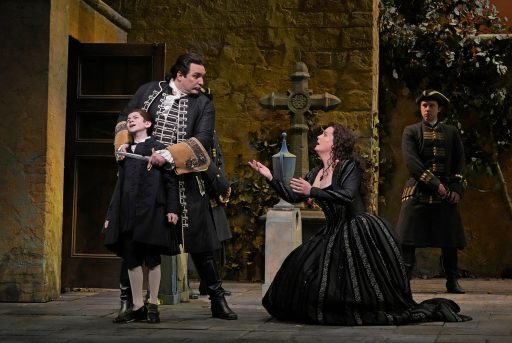 Although none of these singers—possibly excepting Roth Costanzo—possesses the fame that might fill the house, this was a night of fine singing, against the backdrop of a universally admired production. But clearly this is not what the Met audience wants and, indeed, the contrast between the auditorium and the eighteenth-century repertory for which it was never designed could hardly be more glaring. It’s a pity New York does not have a proper theater for baroque opera, but the fact is, it doesn’t. A grand opera hall is not the place to house such a thing. Photo Ken Howard