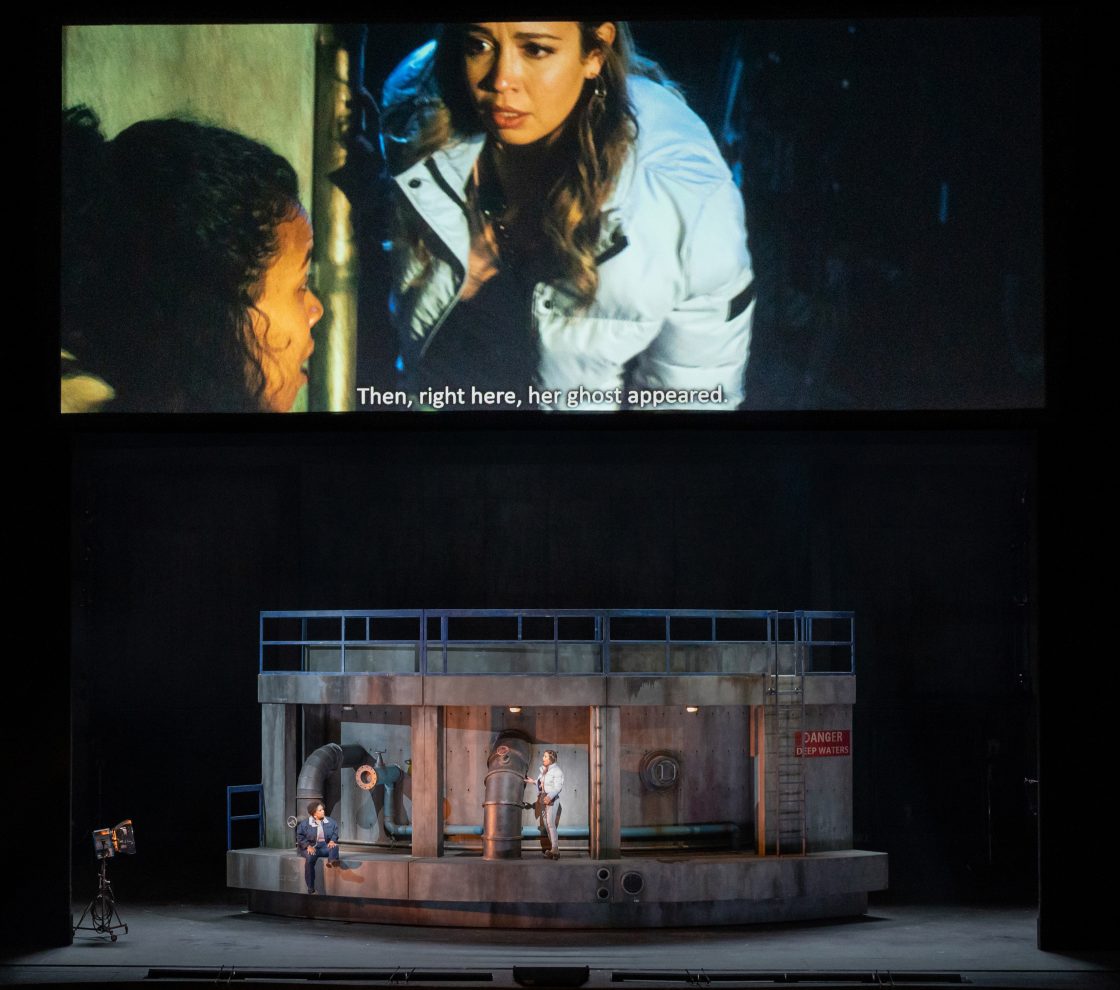 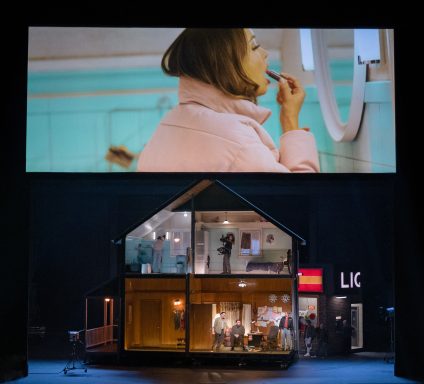 Otherwise, Lucy—our Lucy—is surrounded by an outraged lover, an inhuman brother, an appeasing family minister, an unappealing suitor, and various servants who are under no illusion that anyone but Enrico pays their salaries. Lucy/Lucia is alone. She daydreams ghosts and spirits to advise her and sympathize, but they incline, as hallucinations do, to turn against her or vanish entirely just when she needs their support. It’s rough. So she hits out. We understand isolation and hard knocks, each of us in her or his own way, and we sympathize to a greater or lesser extent. The comic side characters Scott put in his novel are not to be found in the opera, which follows a clear tragic story, hurtling through shades of pain to horror and doom. It’s gruesome, here in the Lowlands of Scotland. Or in the Rust Belt of Ohio or Michigan (where Simon Stone has set his new regie staging of the opera for the Met), life is far less scenic but no more humane. 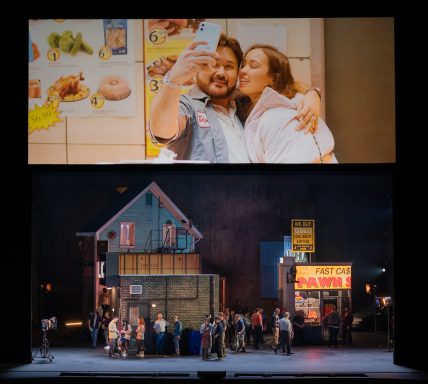 In the new staging, which premiered on April 23rd and was quite full when I attended a few weeks later, we are in the junk-filled back yard of a two-story white trash house in some industrial town of the American Midwest. There are junked cars in the backyard, neon signs for the pharmacy and the motel screaming in the windows from very nearby, a lot of unemployed thugs at Enrico’s beck and call. Enrico does booze and coke, and is running out of time to pay his debts; his solution is to force his pretty, daydreaming sister to marry a rich something-or-other named Arturo. He used to have assistance from their late mother controlling the girl, but now they’re alone except for hired help they probably can’t pay, and the local minister who hangs out in the kitchen for no discernible reason. 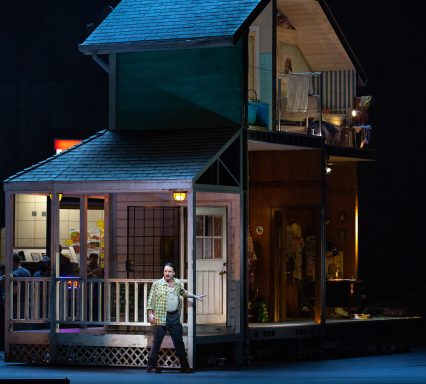 Lucia, in very tight jeans and a puffer jacket, buys something tranquilizing at the drug store and meets her bud, Alisa, at the water purification plant. (Harp solo.) Lucia is the sort of girl who sees ghosts—and so do we, thanks to films of her hallucinations that are presented over the stage set. That set is also on a turntable that brings us in and out of the house and into various other parts of town (including a drive-in theater that shows Bob Hope films). Lucia sneaks out of the house by a long, unsightly fire escape—which she will later descend in her blood-soaked wedding dress, though she appears to have spent her nuptial night in the same cheap motel where Edgardo seduced her in Act I. Edgardo wears a puffer jacket and has decided to join the army—in Act II, he returns in fatigues. From the films overhead, we learn that Enrico has prevented their texts from reaching each other and has even forged some soft-core porn about Edgardo and some other babe, switching heads when necessary. A question on everybody’s mind: Will they have to reshoot a lot of this when the show is revived with a different cast? The answer is: Sure, but it won’t be difficult. For one thing, much of the film is being done on videocam during the actual performance, so that we see Lucia and Edgardo making out, Normanno fiddling with the laptops. 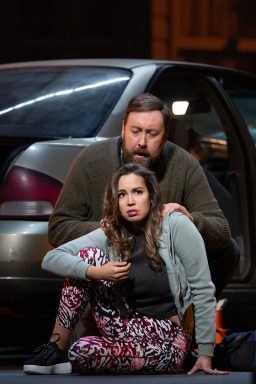 But Lucia is pursued, mid-Mad Scene, by half a dozen bloody fellows in the same pink tux Arturo wore to marry her. The turntable follows her and Edgardo, but it pauses when a pause adds clarity. It seems clear that Stone has actually studied the libretto and the score, unlike his predecessor, and has considered the personalities who are out there singing. The wedding guests are a whirl of suburban low-class taste (the kind of folks who wouldn’t be caught dead—or dying—at the opera—or a black and white Bob Hope movie), and their hilarity is only somewhat interrupted by the return of the bride drenched in rather excessive puddles of blood. (Also: blood turns brown pretty quickly, but Lucia’s blood never does, in any production.) The set, which looks pretty cheap and must have cost a bundle, is by Lizzie Clachan; the costumes by Alice Babidge and Blanca Añón. The projections are by Luke Halls. We don’t actually see the cemetery Edgardo is addressing in the final scene, but we can easily imagine an old-fashioned, small-town, Midwest sort of place. 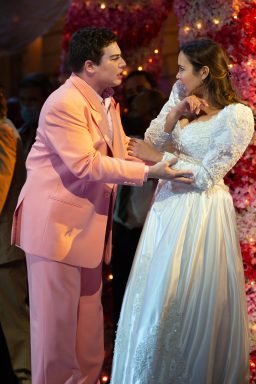 The score is played damn near complete, glass harmonica, Wolf’s Crag (the back of a pickup truck) and all, and Riccardo Frizza serves the singers with great care and kindness. It seems a pity to have all that horn-and-Lothian mistiness in the orchestration go for naught—Donizetti spent time catching the air of bestselling Walter Scott in musical terms—but you can’t have everything. Tell yourself Lucia dreamed up all the sounds she hears while watching old movies and smoking weed. Lucia is one of those operas where, if the lead singers are terrific, none of the rest of the show matters too much. For their elaborately directed new production, the Met assembled some of the best of the new generation of singers. Nadine Sierra, a slim, pretty American soprano who has sung Lucia—among other roles—all over the world, was tremendously effective if not quite ideal in the title role. 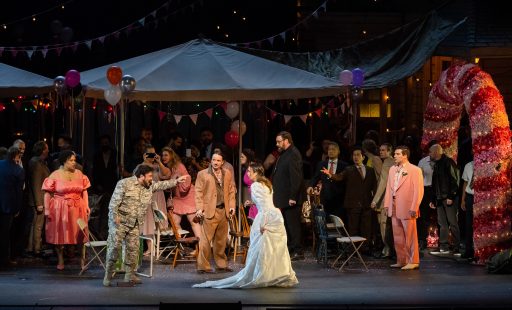 Her voice is lovely and fills the enormous house—no canary she—the middle voice especially beautiful, the top well supported. She knows how to ornament in the proper style, and she can trill. But “Regnava nel silenzio” sagged under pitch, and her top notes can be shrill. In the Stone staging, we are led to believe she is a pill-popper and perhaps worse, and her dubious sanity had the languid rhythm of the drugged rather than the swift alternation of agitated hallucinations that Donizetti aimed for. 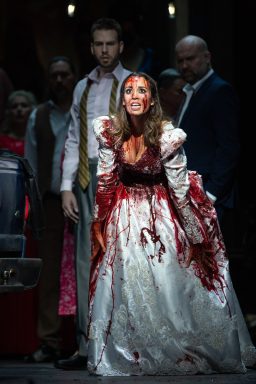 Javier Camarena, who has one of the most attractive voices of the current enormous crop of bel canto tenors, sang with surprising power and intensity, even when obliged to leap about the junk-ridden set. I have heard this singer opposite Diana Damrau, Joyce DiDonato and Pretty Yende, and he shows a Mexican gallantry in blending his juicy tenor with their voices to the most attractive effect. He plays well with angry baritones, too, his phrasing ardent and sincere. His suicidal final scene was a thrill. Artur Ruciński gave us the Met’s strongest Enrico Ashton in recent memory, perhaps since Sherill Milnes did the honors, robust, angry and full-voiced, powerful without forfeiting an attractive timbre—and obliged to jump from the top of the cab of a pickup truck to the bed, his arm clutching a liquor bottle, singing a challenge to Edgardo the while. Raimondo was sung by Matthew Rose, whose basso was perhaps a little too imposing for the confrontation with the desperate, then murderous Lucia. Eric Ferring made an effective if bewildered Lord Arturo in a pink wedding tuxedo, Deborah Nansteel the impressively sympathetic butch Alisa, Alok Kumar the tattling Normanno, in this version Enrico’s drinking buddy. I very much liked the way they framed the sextet, so that the number was clearly a climax as well as a point of musical significance—unlike the same scene in the previous staging by Mary Zimmerman, where you might easily not have noticed the sextet at all (the climax of Donizetti’s score) because a Victorian wedding photographer was doing a distracting comic turn throughout. 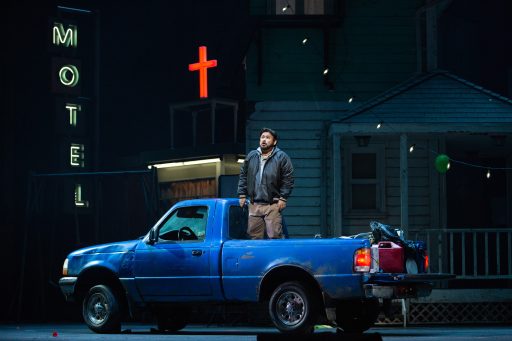 On the other hand, one habit that appears to have sprouted among bel canto singers put me out: the final note held, not gracefully in an ornamental flourish to conclude a verse, but boastfully, lingering over the orchestra, over the other singers, over the scene change, irrelevant competitive breath control. Is this a suggestion that these aren’t opera singers at all but members of a working class whose bravado outweighs any notion of art? Ruciński did this at the conclusion of his handsome “La pietade in suo favore” in the first scene, and then Sierra and Camarena—and the latter surely knows better—did the same thing with the final notes of their cabalettas, as if demanding applause like professional wrestlers. Photo Marty Sohl / Met Opera