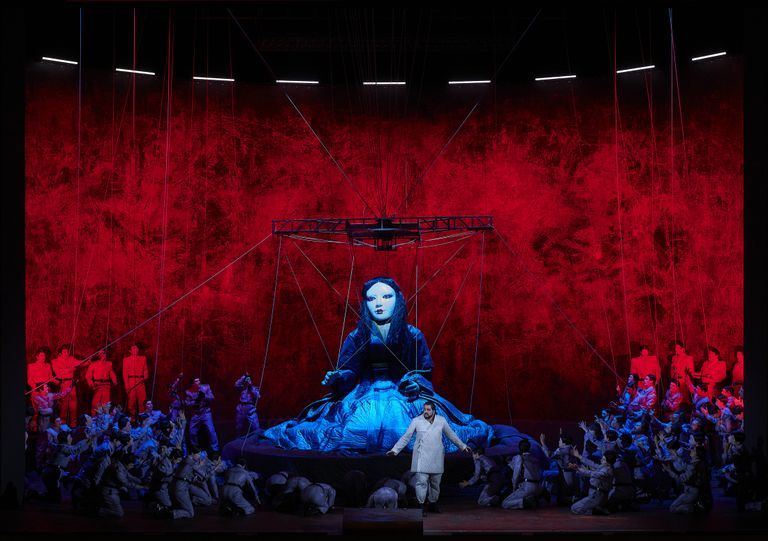 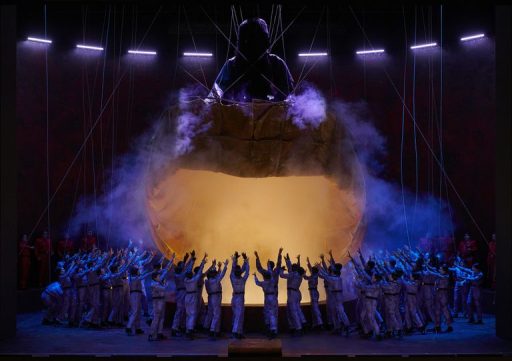 Mehta led one of the best recordings of the piece already fifty years ago! Yet there is not much space left for the chorus as Popolo di Pekino dressed in ostensibly Chinese uniforms (costumes by Ursula Kudrna) in the production by Philipp Stölzl who places a giant puppet version of Turandot on his stage in front of a crescent-shaped black wall. What seems to be a witty idea at first, attracts the audience’s attention to an extent that turns the singing, in fact all musical aspects, into a minor matter, as members of the technical team have to struggle to pull the strings of the puppet which is more and more dismantled after the riddle scene. 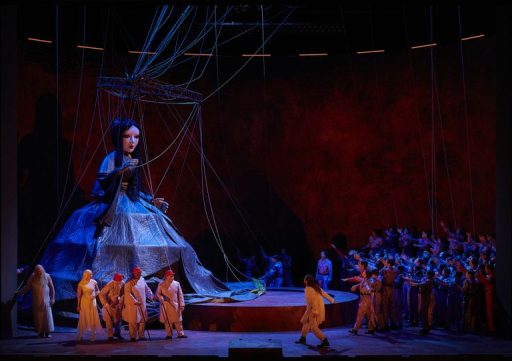 Consequently, Calaf falls in love with the doll rather than the human Turandot; so it is little wonder that she poisons herself to die after her final Amor! The elaborate scene of the three ministers Ping, Pang and Pong on a nicely lit heap of skulls with some impressive patterns on the black wall (lighting by Philipp Stölzl and Irene Selka) cannot make up for the lack of emotional depth, which is a basic problem of the production rather than, according to Stölzl, the outdated image of women in opera today. As a fairy tale, Turandot is not only about violence and cruelty as largely depicted in this production and fairy tales can be really cruel at times! But it is also about imagination, beauty and aesthetics that fairy tales have in common with opera as an art, which is often ignored by modern directors. But as long as they do not alter the musical structure, masterpieces will be masterpieces! Turandot is undoubtedly one of them with enormous vocal requirements. 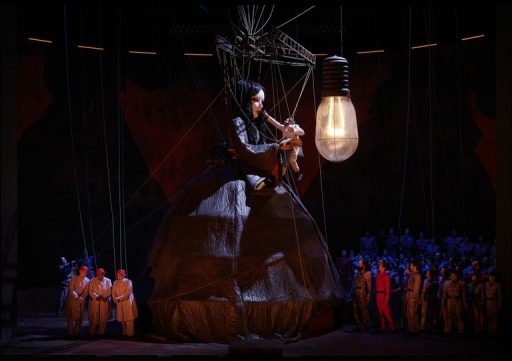 Elena Pankratova’s powerful dramatic soprano has what it takes to sing the ice princess Turandot. She starts In questa reggia with a warm tone to bloom into the sweeping peaks. With a perfect mix of warm timbre and vocal beauty, she can cope very well with both the high, soaring phrases of the second act and the more tender and lyrical moments of the finale. Murat Karahan is also a top-notch Calaf. His bright tenor delivers an energetic rendition of the part with radiant high notes and thrilling intensity. What a physical stunt: pulled up on stage to beat the gong as a new suitor and sing Turandot! What a vocal stunt: he remains on the top note at the end of “Ti voglio ardente d’amor!” 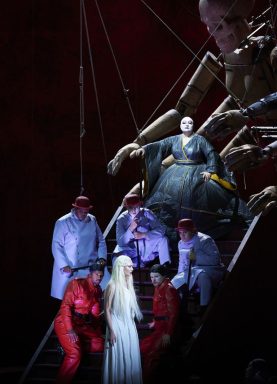 Olga Peretyatko looks pretty and outlandish as a blonde Liù. She sings impeccably with a Slavonic tone but both pieta! and the inevitable pianissimi have already been heard sweeter and lovelier so that she is no match for say Leontyne Price or Teresa Zylis-Gara but she takes the curtain calls as if she were. Timur as Calaf’s blind father is inherently a pale, static character so that René Pape can hardly bring him to life but he impresses vocally, particularly after Liù’s death. Ping, Pang and Pong are active ministers in this production with superb acting and vocal performances by Bernhard Hansky, Andrés Moreno García and Siyabonga Maqungo. The Bayreuth Tristan of the 1990s, Siegfried Jerusalem, is back as the Emperor Altoum who does well at the age of 82! Photo Matthias Baus