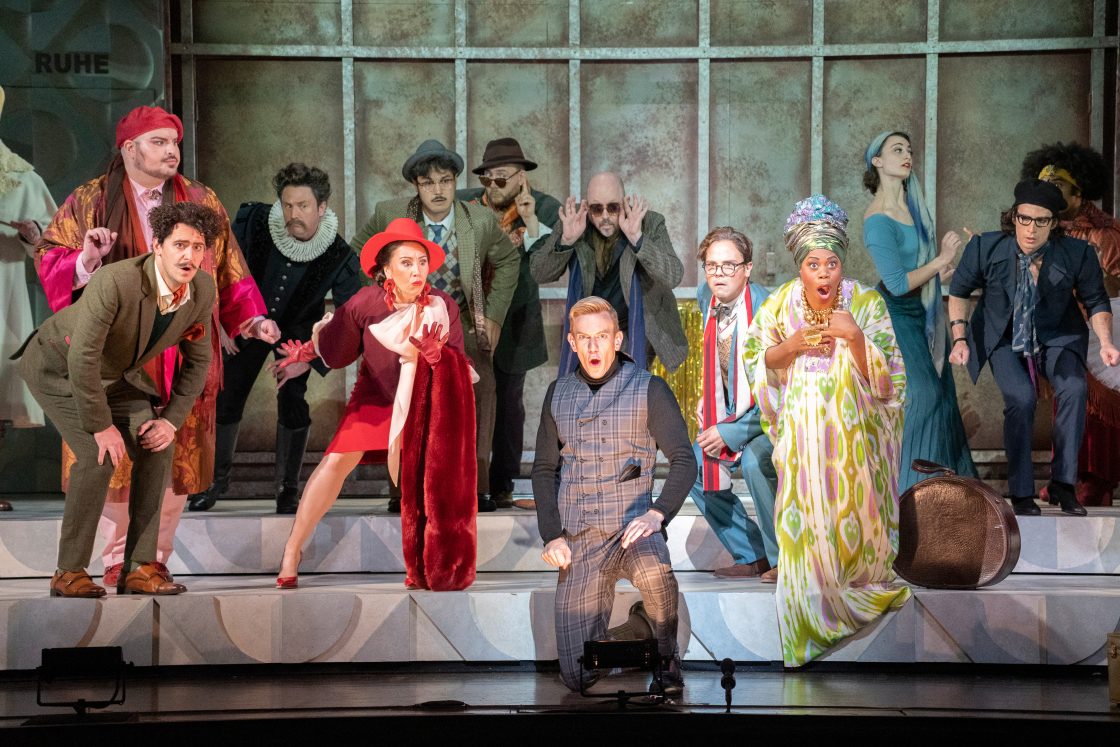 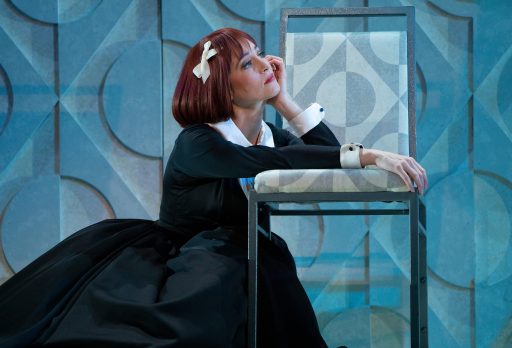 Supertitles, however, nowadays make the German accessible to a broader conclave. The vocal parts are as challenging as those of any of the great Strauss operas, and three hours is a stretch for a plot that Donizetti, in Don Pasquale, easily resolved in ninety minutes for just four singers. (Donizetti had a skill with comedy that Strauss could only envy.) Verbosity accounts, in part, for the opera’s obscurity—think of the patter of Act III of Rosenkavalier or the prologue of Ariadne extended for three acts. Schweigsame Frau also lacks the sort of popular number that can keep an obscure opera in the minds of its potential audience—arias like “Zweite Brautnacht” from Die Aegyptische Helena or a duet like “Aber den Richtige” from Arabella. There is nothing familiar in this score, though every note of it is obviously mature Strauss, subtle and expert. In short, audiences, even those fond of Strauss, are not sure what to expect, and “comic opera” is not always an encouraging description. 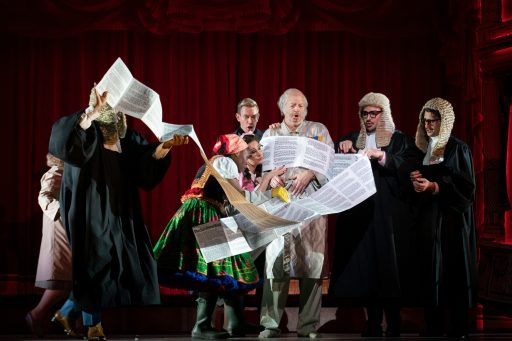 But, inspired by his new perhaps too-ingenious librettist, who in turn was inspired by Ben Jonson’s Jacobean comedy, Epicoene, Strauss, though his melodic fires had banked somewhat (he was seventy), was full of solutions to the problem of the story, which is this: Sir Morosus, a retired admiral, longs for female companionship to solace his final days but loathes noise above all things. His nephew Henry, long vanished in Italy, returns to London having not merely married a diva, Aminta, but joined her opera troupe, which he has brought along to besiege the old man for a subsidy. 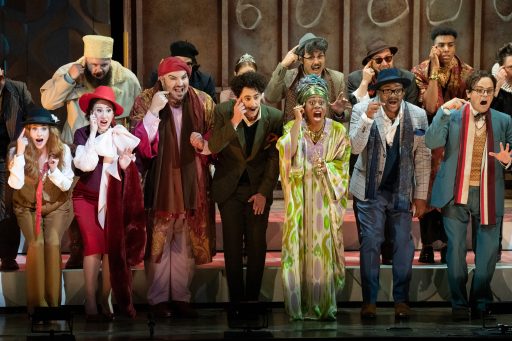 Morosus disinherits the scapegrace and sends a friendly barber to find him a “silent wife”—a companion whose existence will spite young Henry’s hopes. The barber, one Schneidebart, locates the shy Timidia—who is really the diva Aminta–and she turns the household upside-down. We may recall here that it was Strauss who rediscovered Mozart’s Così fan tutte and launched it into the popular repertory; here, he creates not only a parody wedding ceremony in imitation of Despina’s notary at the climax of Così, but tops it with parody divorce proceedings that occupy much of Act III. The divorce scene is mighty lengthy, and it’s only fun if you can follow the wordplay—but that’s the secret Donizetti and Mozart knew and Strauss never understood: in comedy, make your points quick as lightning, simplify, don’t complicate. Donizetti’s and Rossini’s comedies are delicious even if you don’t understand a word of them—the music is fun, even in confusion. Everything in Schweigsame Frau is twice as long and twice as complicated as it has to be. Why have a bride contest with three entrants? To give the rival sopranos longer parts—but why bring them in at all? And why give Aminta a Music Lesson Scene—she gets to show off her spectacular coloratura, but she’s already done that. In the end, Morosus, like Donizetti’s Pasquale, accepts the joke, forgiving everyone. This is not convincing (how can he possibly have enjoyed the noisy goings-on?), but how else are we to conclude matters? 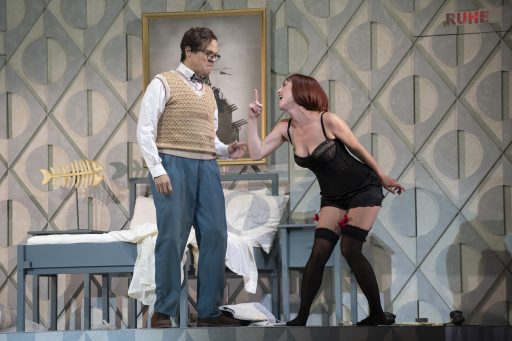 On the page, I suspect, the libretto seems tedious, but director Christian Räth, choreographer David Neumann and costumer Mattie Ullrich produced a festival performance of rapid transformations, delirious movement and spectacular color. The delight of Henry’s opera pals as they costume themselves at the end of Act I dazzles eye and ear. The wedding (complete with muscular putti in ballet skirts, with bows and arrows) is a lovely thing, a masque in Straussian baroque, the shenanigans of the jokers and the bewilderment of Sir Morosus ever inventive, and the trial full of absurd Latinism and other faux-stately formality. (Timidia’s consoler is a seven-foot-tall screeching, bespangled parrot in RuPaul drag.) The set resembles an opera house within the shipshape Morosus mansion, and the singers and dancers disport themselves in disciplined pantomime. 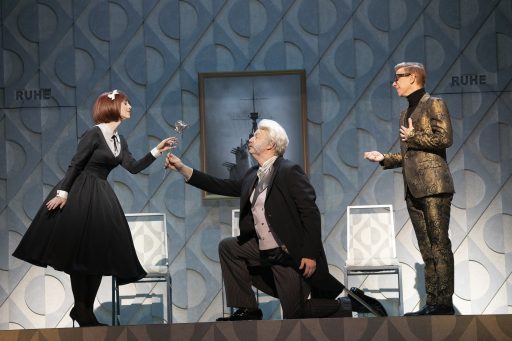 Everything on stage is well-organized mayhem—while the American Symphony Orchestra superbly led by Leon Botstein, master of all SummerScape revels, is an ideally precise riot squad. Parody is the order of the day: Morosus signals his choice of bride from the three contestants by presenting her a silver rose, and Timidia sings “Monteverdi” in her Lesson Scene. It is all calculated charm, but far too heavy.The singers, youthful, athletic and able, had five weeks of rehearsal, and their complex and dancelike movements prove the period’s value, while their voices sound fresh and full-bodied in the brilliant acoustic of Frank Gehry’s Sosnoff Theater. There wasn’t a second rate voice in the cast, or a clumsy step except when the character was intended to stumble. Basso Harold Wilson lacks a few of Sir Morosus’s very lowest notes (Kurt Moll used to sing this part; a video survives) but he dodders and flails and hits the farce-basso mood—with a dignity no Baron Ochs would ever require. Jan McIntyre, who also sings Norina (Reri Grist performed both parts, too), sang Aminta/Timidia—I preferred her lyric singing in Act II to the hysterics of Act III, but she certainly could handle them, and is obviously a Zerbinetta to come. 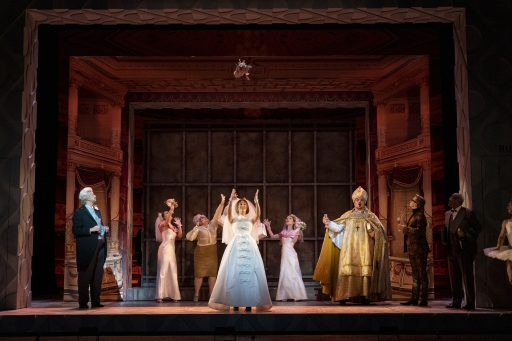 David Portillo, as Henry, managed the typically lofty and inhuman Strauss tenor part with appealing top notes and suave phrasing. Perhaps the most attractive character on the stage, however, was Edward Nelson, as Schneidebart the Barber, who has (like any operatic barber) concocted the plot within the plot. Nelson’s firm, precise baritone and sexy stage movement—and the gold suit in which he has been clothed in Act II—riveted every ear and eye in the house to his plotting. Bass Matthew Anchel and baritone Jorell Williams performed their judicial functions with satiric gravitas. Anya Matanovič sang a pedantic bridal candidate wittily but mezzo Chrystal E. Williams was ravishing in her brief Act I contralto aria, a moment one wished would go on forever. 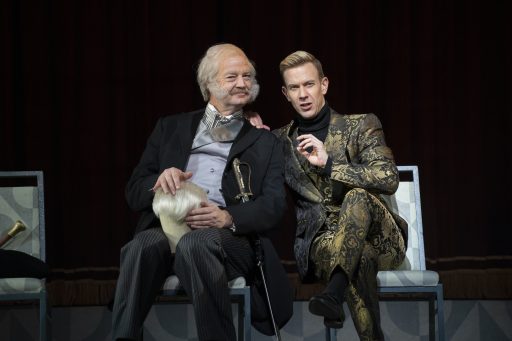 This comic opera may be too windy to be funny, but the dazzling production delighted an enthusiastic crowd come for familiar unfamiliar Strauss. SummerScape, which each year revives a worthy and obscure opera—Les Huguenots, Osud, Euryanthe, Demon, The Wreckers, King Arthur—is one of the festivals dedicated to expanding our appreciation of the operatic past at the highest level of contemporary artistry. Their annual achievements justify its place in every New York opera-lover’s summer plans. Photo © Stephanie Berger